The report released by a newly formed anti-arena group is just the same people making the same threats.

Nothing new happened on Tuesday.

It was the same people spewing the same tired and flawed arguments. The group that called the press conference might be called Sonics Without Subsidies, but that's just a legal name and, if HBNW and the Councils give into their demands, they would change their name to Sonics Without Sodo Location.

This is the threat of a lawsuit that has already been filed and rejected. Yes, it was rejected due to the timing of the suit, but they already sued this thing on the basis of I-91 and it was always going to be refiled. Did anyone doubt that?

The only difference is that yesterday they called a press conference and released charts, graphs, and spreadsheets to backup their arguments. That is all.

Here is the group's "shortfall" summary. 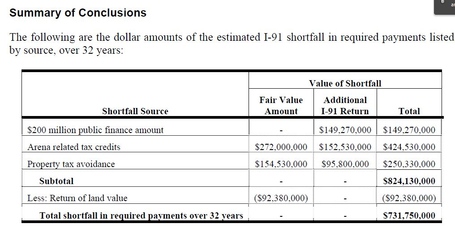 So they are essentially saying that the deal is not I-91 compliant for the following reasons.

After reducing the sum of those three numbers by their value estimate of the land when it returns to the City at the end of the deal, the group says that the MOU gives the Hansen group $731 million in illegal subsidies.

I'm not an accountant, but I will attempt to address their same old arguments with our same old answers.

First of all, they are including tax credits given by the County, which is not subject to I-91. Second of all, these are tax revenues that would not exist without the arena being built and the City receives the same amount of these taxes with or without the arena.

First of all, they are once again including the County's portion of the bonding capacity, which is not subject to I-91.

Second of all, the City is not spending general fund money here. It is simply lending a small portion of its bonding capacity to the Hansen group. The Hansen group is repaying the loan with arena revenues and, yes, tax credits and property taxes. Once again, that tax revenue wouldn't exist unless the arena does, so there is no net outward cash flow for the City.

I-91 is a badly written piece of legislation and these people wrote it. They want 100% private financing for sports arenas under every circumstance. They thought they had crafted an airtight piece of legislation that would accomplish that without saying that's what they were trying to accomplish. They thought they had prevented ANY public dollars from being used on arenas ever again, but they were wrong. Hansen found a way to do it that is compliant with their own law. Not only that, he went all jujitsu on them and used it to get this done.

They can't stand that Hansen beat them at their own game and will use every tool in their chest to recover from their legislative incompetence.

This is a tremendous opportunity for Seattle's new mayor, Ed Murray, to prove he meant what he said about the MOU. He said that the councils did a good job of crafting a piece of legislation that protects the City's assets. He said he would not work to undermine it. Did he really feel that way or was he blowing smoke in our direction?

I hope that Murray takes advantage of this opportunity. He should hope so too. Without the support of a good chunk of Sonics fans, there would be no Socialist about to take a seat on the City Council.

Our opinion matters where it counts. The ballot box.