Show your love for The Glove, the greatest Supersonic of them all.

Share All sharing options for: The Ten Greatest Players in Supersonics History - #1 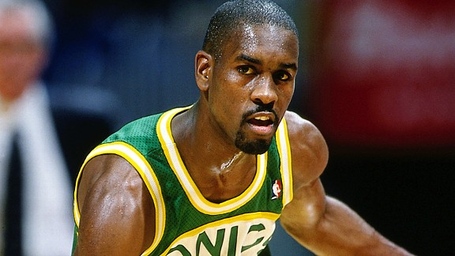 As if it could be anyone else. The franchise’s career leader in points scored, games played, minutes played, field goals, field goal attempts, assists, steals, and career win shares, Payton was a nine-time All-Star, a nine-time selection to the NBA All-Defensive team, and the NBA’s Defensive Player of The Year in 1995-96, the only point guard ever to win the award. Payton was one of the NBA’s very best players of the 1990s, one of the most durable NBA athletes of all time and arguably one of the top 20-25 best players ever to play in the league.

Drafted with the #2 overall pick in the 1990 NBA Draft behind Syracuse’s Derrick Coleman as a brash guard from Oregon State, Payton joined a team that was already fairly decent. The Sonics under coach Bernie Bickerstaff had been a .500 team the previous year. With a lucky bounce of the NBA Draft lottery balls, their acquisition of a bona fide college superstar point guard with outstanding man defensive skills set the stage for a run of successful seasons that lasted well into the following decade.

Payton was an absolutely tenacious on-ball defender, and unlike many of his contemporaries managed to effortlessly adjust his game and defensive style after the elimination of the hand-checking rule in 1994. It’s hard to explain now just how much that changed the landscape of the game. Before 1994 masterful defensive guards like Payton, Derek Harper, Mario Elie and Doc Rivers were common; tall, strong guards who were able to use their hands to steer players away from the basket and subtly force the ballhandler towards a double team. In an effort to open the game up more, increase scoring and unencumber high-flying athletic players like Michael Jordan, the league gradually began to crack down on physical play and instituted rules changes in favor of offensive flow that still shape the game today. Guards could no longer defend quick players without having to move their feet. Many of the defensive stalwarts of the late 80s and early 90s found themselves unable to keep up with the new breed of athletic wingmen. Payton however possessed excellent lateral movement, which combined with a relatively low center of gravity in his stance allowed him to maintain perfect defensive position against many players and, like Jordan, used his speed to excellent advantage on defense rather than his hands. The youthful core of Payton along with Shawn Kemp was complemented by an array of steady veterans in Nate McMillan, Derrick McKey, Ricky Pierce and Eddie Johnson, and later Detlef Schrempf and Sam Perkins. At their peak the Payton/Kemp teams were among the very best and most exciting franchises in the league, and it only seemed a matter of time before they fulfilled their destiny as NBA champions.

However it was not to be. Despite a tremendously successful series of regular seasons Kemp departed acrimoniously in 1996-97, and Vin Baker was simply not as complementary a core piece to Payton’s backcourt wizardry. The rest of the team began to age in place, and with virtually no help coming from the draft or free agency it began to stagnate around the late 90s-early 2000s.

None of that was due to Payton. Payton was a tireless worker who often played a full 82-game schedule as a starter and logged heavy minutes when he did play (often 35+ minutes a game). He was such a force on both ends of the floor that by his presence alone the Sonics would always be guaranteed to be at least a .500 team. Unfortunately in the late 90s the franchise was stuck in the NBA middle ground: they would never be bad enough to garner a top draft choice which could net them a second superstar, but they also weren’t good enough to defeat the top teams. Baker’s descent into alcoholism and his massive contract also completely hamstrung the team’s ability to add real talent.

In hindsight, the team could have and perhaps should have traded Payton a couple of years before they eventually did in 2002-03. But by that time Payton had become a franchise and civic icon and with little else to sell the public on following the departures of Kemp and coach George Karl, GP stayed even as the rosters around him became younger and less talented. Payton’s disposition wasn’t really ideal for mentoring young players and when the time finally came to move him the team did get fantastic value for the 34-year-old guard in 27-year old Ray Allen, who was well within his prime and became the team leader for the remainder of its tenure in Seattle.

Payton went on to play for the Bucks, Lakers, Celtics, and Heat until his retirement in 2007. In 2013 he earned a well-deserved nomination to the Basketball Hall of Fame. Following his induction the only remaining capstone to his long and successful NBA career will be the retirement of his number #20 in Seattle, a day in which a patient, grateful and fortunate fanbase will be able to pay tribute to the greatest player ever to wear a Sonic uniform.

Gary Payton vs. Michael Jordan in the 96 Finals:

My memories of Payton are numerous and fond. He had the single best post game I have ever seen in the NBA from a guard, period. Where many guards including Jordan beat their opponents with unblockable picture perfect jumpers, Payton’s signature move was often a snaking, sidewinding dart into the paint for a layup. His idiosyncratic posture when bringing the ball upcourt, chin thrust forward, mouth constantly in motion, always made me think of the Alien for some reason. His bravado never seemed forced, perhaps because his actions on the court always backed it up. Please share your favorite memories of The Glove with us and we’ll all look forward to the day we see his jersey hanging in the rafters.