Join us as we visit the ten greatest players in Supersonics history. Today we salute #4, a man who truly blazed the path for many superstars that followed, including a Sonic or two.

Share All sharing options for: The Ten Greatest Players In Supersonics History - #4 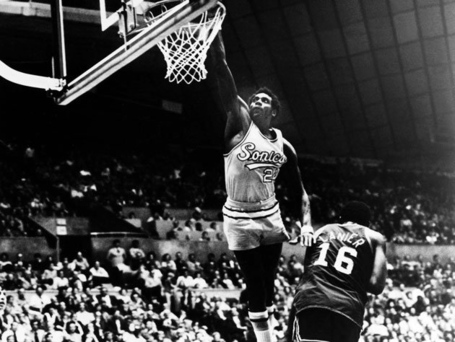 To paraphrase legendary comics author Alan Moore: if Spencer Haywood did not exist, we would have to invent him. The game as we know it today, both in the pros and college, would not exist without him.

Many words have been written by better sportswriters than I about Spencer Haywood’s tortuous, trailblazing path to professional basketball. A path marked by litigation against a league that resented Haywood’s questioning of the reserve clause as stubbornly as Major League Baseball resented Curt Flood. A truly unfortunate situation of which we were all recently reminded a few days ago when Haywood received news that he had been accepted into the Pro Basketball Hall of Fame, only to learn that he had been snubbed. It’s hard –not- to think that bad feelings lingering in the NBA front office from Haywood’s groundbreaking lawsuit Haywood vs. National Basketball Association didn’t play some part in that debacle, but much like the 64 free throw attempts given to the Phoenix Suns in Game 7 of the 1992-93 Western Conference Finals, there are things we will never know for sure. What do you mean, of course I'm not bitter. I don't hold on to that anger any more than I hold on to being angry about Butch Johnson's TD "catch" in Super Bowl XII. Now where were we? Oh yes.

Haywood’s unique journey to the NBA began both with his sole year in Division I basketball at the University of Detroit, where he merely averaged 32 points and 22 rebounds a game and a stint on the 1968 Olympic team where he set a record for field goal percentage that still stands today. Since NBA rules at that forbade players from entering the NBA Draft before their class graduated, Haywood began his pro career with a short but eye-popping stint with the Denver Rockets of the ABA, where he was named both Rookie of the Year AND MVP for the 1969-70 season, and in terms of both counting stats, win shares, and pretty much any other metric you care to name was far and away the best player in the entire league that year. Haywood was originally drafted by the 76ers as a 2nd round draft pick in 1970 and subsequently traded to the Buffalo Braves. Haywood signed as a free agent with the Supersonics that December. Sonics owner Sam Schulman decided he would help Haywood take the NBA to court, and the case stretched out all the way to the U.S. Supreme Court before the NBA finally settled.

Now comfortably ensconced as a Sonic, Haywood was the franchise’s first superstar. Over the next five seasons it’s safe to say that Haywood absolutely dominated the league, averaging 24.4 points and 12 rebounds a game while shooting 46% from the field and 80% from the line and chalking up average total win shares of 7.2 for that period. His peak era of 1972-74 is more or less equivalent in terms of win shares of Ray Allen’s best seasons (and Shawn Kemp’s 3rd and 4th best seasons, hint hint.) Put simply, the guy was a hell of a player. Despite his brilliant individual accomplishments, during Haywood’s tenure the team only made the playoffs once, in 1974-75 where they made it to the Western Conference semifinals only to fall to the Rick Barry-led Golden State Warriors.

Haywood was traded to the Knicks in 1975 for Gene Short and a future 1st round pick. He finished his Sonic career as a four-time All-Star, a two-time All-NBA first teamer and two-time second teamer. Haywood stayed in the league another eight seasons, including one with the Lakers in 79-80 where he would have won a championship, but was dismissed by Coach Paul Westhead for falling asleep during practice. By that time age and a fairly serious cocaine addiction had spirited away much of the player he was, but what a player that was. Much like Shawn Kemp after him, Seattle saw the best of his NBA career, and his lasting legacy in the form of early entry into the NBA is still felt today. Plus, he was married to Iman in the early 80s, long before David Bowie, which isn’t a bad achievement for anyone.

Here's a great piece on Spencer from NBA TV, where even known grump Peter Vecsey has good things to say: