Join us as we unveil the runner-up, the second greatest player in Sonics history. The most dominant player at his position in team history, and an essential part of the team's only championship run.

Share All sharing options for: The Ten Greatest Players In Supersonics History - #2 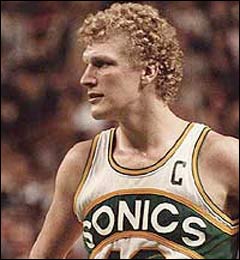 As the pivot man for the NBA champion-era Sonics of the late 70s, Jack Sikma’s spectacular eight-year run with the Sonics has only ever been exceeded by a handful of players. Sikma made six consecutive All-Star teams and was one of the more offensively efficient forward/centers of his era.

Arguably the only truly dominant center in franchise history, Sikma had a very productive four year career at Illinois Wesleyan, averaging 27 PPG and 15 RPG in his senior season while shooting 53.8% from the field and over 80% from the line. The Sonics drafted Sikma with the 8th overall pick of the 1977 NBA Draft. Sikma made the All-Rookie team easily with a aterrific season where the team made the NBA Finals, and over the next nine seasons he became the heart of the Sonics offense, averaging 8.8 total win shares, including an incredible campaign in 1981-82 where he had 12.6 WS, a DRB% (percentage of available defensive rebounds a player grabbed while on the floor) of 28%, while averaging 19.6 PPG, 12.7 RPG, with 3.4 APG, 1.2 steals and 1.3 blocks. Sikma was also a deadly free throw shooter, posting a career percentage of 84.9%.

The team wasted no time contending for an NBA title immediately following Sikma’s acquisition. The Sonics enjoyed back-to-back NBA Finals appearances in his first two seasons, first losing to the Washington Bullets in seven games, then the following year winning it all. Though Sikma was third in scoring he led the team in total win shares, defensive win shares, and was second overall in offensive win shares behind Gus Williams. Sikma was also a masterful defensive rebounder and a very competent passer, all quite impressive feats for a second-year player.

The team would go on to make the playoffs for four more consecutive years with slowly declining results, but those were due more to the loss of core players around Sikma, such as Dennis Johnson, rather than a decline in Jack’s skills. Sikma was a steady double-double threat for the entirety of his career as a Sonic, and served as an offensive anchor and consistent frontcourt threat.

Around 1984-85 when the team lost guards Fred Brown, Gus Williams and coach Lenny Wilkens the championship era squad was all but gone as the teams began to morph into the Tom Chambers/ X-Man era of the late 80s/early 90s. Sikma was traded to the Milwaukee Bucks before the 86-87 season for (hold your nose) Alton Lister and two first round draft picks that became Mark Jackson (pick traded to NY with Gerald Henderson for Scottie Pippen, who was traded for … Olden Polynice). The team would never again in its history find a player of Sikma’s caliber at the center position. Meanwhile, he remained an extremely capable and valuable big man for the Bucks until his retirement from the league in 1991 at age 35.

His number #43 was retired by the club, and he briefly returned as a big man’s coach in the mid to late 90s under head coach Nate McMillan.

The video above is a little blurry but shows off Jack's ultra-sick fadeaway J and exceptional rebounding skills.