The '96 Sonics almost pulled of an improbable comeback, after trailing the entire game, but the '12 Thunder's poise and timely plays help them survive Game 5 with a 97-96 win.

Sonics Rising and the folks over at Welcome to Loud City had a friendly debate about the merits of a ’96 Sonics vs. ’12 Thunder matchup. Both sides made some compelling arguments, but as they say, that’s why they play the games.

The team over at www.WhatIfSports.com ran a simulated seven game series to determine who the best team is/was. This week, we’re continuing to recap those simulations in a somewhat fantastical fashion. 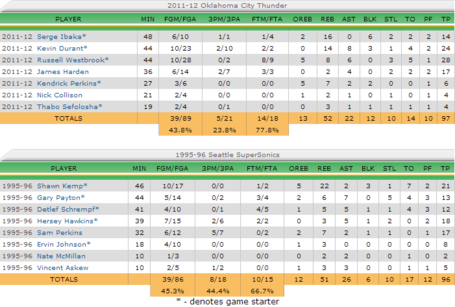 23, 23, 22, 22, 27. Those were the ages of the Thunder’s starting lineup in 2012. The ages of Kevin Durant, Russell Westbrook, James Harden, Serge Ibaka, and Kendrick Perkins respectively. They were the 19th youngest team roster to ever reach the NBA Finals and just the 10th youngest team to appear, but fail to win the championship.

Another close game, but the young Thunder stayed together and avoided elimination... at least for now

There have been only two other teams that made it to the Finals with a roster that had a younger average age since 1990 (the 2009 Los Angeles Lakers and 2002 New Jersey Nets). The 2012 Thunder were a very rare team. There’s a reason for that.

Young teams usually are not poised enough to ride the ebb and flow of the NBA playoffs and come out unscathed. There’s a belief that it takes seasons to gain the necessary wisdom, and battle scars, to prove you can win when the going gets tough. Michael Jordan experienced it with the Detroit Pistons in the late 80’s, LeBron James experienced it with the Boston Celtics in the 00’s.

The pressured filled endings to Games 3 and 4, led by the Sonics’ experience was a prime example of that truth. But a funny thing happened, down a 3-1, with their backs against the wall, the Oklahoma City Thunder bucked the system with a crunch time win of their own.

The Thunder, who have gained control of the game in both of their previous close loses, almost choked away the lead again in the fourth quarter.

Defense was the calling card of the first quarter as Seattle (4-16, 25% FG) and Oklahoma City (7-20, 35% FG) expertly contested shots, caused turnovers, and generally played a very physical game. Each team clearly schemed to keep the opposing star(s) from getting off to an effective start. Oddly each starter scored (via FGs or FTs) at least once in the first.

Unfortunately for the Sonics, the type of lackadaisical play that has characterized the middle quarters in almost every game continued. You can point to the Sonics’ star point guard, Gary Payton (13 points, 7 assists, 6 rebounds, 5 steals, 5-14 FG), as an example.

When Payton is aggressively running the point on offense (looking for his shot, getting to the basket, running the break), the Sonics lack of bench options (particularly in the backcourt) and inconsistent outside shooting can be masked. When he is not, the Sonics offense stalls and they settle for contested outside shots in the half court. That was evident as Payton did not convert a shot inside until the third quarter (a dunk with 2:37 left), routinely settling for outside jumpers. By the time he got going in the fourth it was too little, too late.

Credit Detlef Schrempf (12 points, 5 rebounds, 5 assists) and Hersey Hawkins (18 points, 5 assists) for bailing out the offense with good ball-movement, spirited drives, and timely shooting to keep this game close. The Thunder, led by James Harden (10 points in the quarter, 17 points total), ran a fluid and varied attack scoring from inside and out with minimal resistance.

Kevin Durant (24 points, 14 rebounds, 8 assists, 10-23 FG, 2-10 3PT) looked good on paper, but was visibly frustrated with the Sonics defense, particularly in the second and third quarters. Credit Sam Perkins (17 points, 7 rebounds, 5-7 3PT) and Hawkins for helping coax Durant into shooting jumpers, instead of driving to the cup on "Big Smooth" or posting up the smaller Hawkins.

Things opened up in the third quarter, as Seattle was able to get out and run a bit as the outside shots started falling, opening up the basket for the Sonics. Perkins was 3-3 on 3PT in the third, and Shawn Kemp (21 points, 22 rebounds, 7 turnovers) came to life with 10 points of his own. It still wasn't enough as the Thunder, led by Westbrook 13 points (7-7 from FT), maintained the lead going into the final period.

Seattle’s defense tightened in the fourth as OKC went the first 3:30 without a basket, missing eight straight shots, finally giving Seattle back the lead, 80-78. A Nick Collison jumper broke the drought, but Seattle immediately re-gained the lead, maintaining it until the aforementioned run to end the game.

Can the Thunder capitalize?

Serge Ibaka (14 points, 16 rebounds, 6 blocks) was huge in this one, as he finally matched Kemp’s effectiveness and physicality, sending a message that this young Thunder team was not ready to give up on this series. He was particularly poised at deterring Seattle’s attempts at the rim (including a masterful block on Payton after Westbrook's go-ahead basket), forcing them to play outside their comfort zone on offense.

Just as much as the Sonics have to be disappointed in their deflating play, the Thunder have to be relieved that they didn't fumble away another crunch time performance. There is no room for celebration yet, they still have quite a mountain to climb to win this series. For at least one game though, OKC has proven that they can be as poised as their veteran opponents.

Player of the Game: Serge Ibaka. Solid defense on Kemp, great work on the boards, and a deterrent at the rim. He did it all on defense.

X-Factor: James Harden. Another solid game when the Sonics defense was focused on stopping Westbrook and Durant.

You Have To Do Better: Gary Payton, Sonics' Bench. Gary Payton has not played well on offense in both Sonics’s losses. Seattle’s bench has been invisible (sans Sam Perkins) this entire series, Seattle needs more from this group.