Once leading the series 3-1, the '96 Sonics faced a desperate '12 Thunder team looking to force a Game 7. And with an epic fourth quarter collapse, the '96 Seattle SuperSonics all but handed it to them.

Sonics Rising and the folks over at Welcome to Loud City had a friendly debate about the merits of a ’96 Sonics vs. ’12 Thunder matchup. Both sides made some compelling arguments, but as they say, that’s why they play the games.

The team over at www.WhatIfSports.com ran a simulated seven game series to determine who the best team is/was. This week, we’re continuing to recap those simulations in a somewhat fantastical fashion. 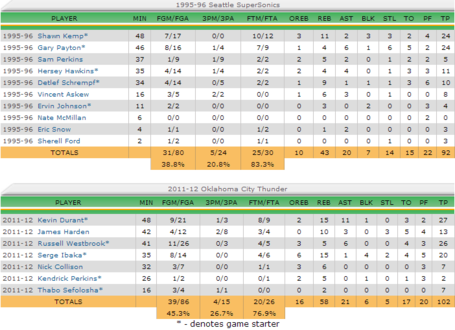 It’s been almost 20 years. And it feels like it is happening again. If you fancy yourself any kind of real Seattle SuperSonics fan you know what I’m referring to.

The 1994 NBA Playoffs. Denver, Colorado. Game 5. The Nuggets, down 2-1, tie the first round series, forcing a stunning, winner-take-all, close out game in Seattle. We all know how that one turned out. It burns you up inside just thinking about it.

After being down 3-1, the Thunder have won two in a row to tie the series at 3-3, forcing a deciding Game 7 in Seattle. Dominating for most of the first three quarters, Oklahoma City stymied a spirited Sonics comeback, pulling away in the fourth quarter for the 102-92, Game 6 win.

THUNDER STRIKE! OKC TAKES IT TO GAME 7 VS SONICS

The 2012 Thunder vs the 1996 Sonics has reached its inevitable destination in game 7, as OKC gets it done at home.

THUNDER STRIKE! OKC TAKES IT TO GAME 7 VS SONICS

The Thunder played a complete game

This was as convincing of a win you will see from the Thunder. The Thunder with bookend runs of 22-9 in the first quarter and 22-7 in the fourth quarter, ran the Sonics off the floor in a game that shouldn't have been as close as it was.

The first quarter started close. Gary Payton (24 points, 6 assists, 5 rebounds, 6 steals, 6-18 FG), clearly perturbed by his struggles in Game 5, came out firing. Hounding the Thunder on the perimeter, Payton came up with 2 steals in the first few minutes. Mixed in with his assault on the rim, he had OKC on the ropes early. The Thunder, looking shell-shocked initially, recovered. Quickly.

Taking a cue from their aggressive play in Games 4 and 5, the Thunder used smart drives to obtain shots at the foul line. OKC converted 10 of 11 shots from the foul line in the first quarter. Scott Brooks’ decision to insert James Harden (13 points, 10 rebounds, 4-12 FG) early in the first was a key decision that gave the Sonics trouble on defense. With an extra shooter and ball handler on the floor, the Thunder extended the Sonics’ defense, opening the driving lanes.

The second quarter was the beginning of a hard-fought comeback that extended into the third quarter. Payton continued to carry the Sonics, scoring 11 points in the quarter on a variety of jumpers and drives. "The Glove" was the only impactful Sonic at this point. Karl, searching for a spark, even brought Eric Snow (!) into the game.

Scott Brooks, troubled with Seattle's defense all series, finally solved found an answer to that riddle. Using Kevin Durant (27 points, 15 rebounds, 11 assists) as a point forward, Brooks facilitating the offense through him, doing two things that changed the complexion of this game:

1) As an adjustment to Seattle’s defensive rotations on Durant, putting the ball in KD's hands more prevented the Sonics defense from shading toward him while he was off the ball. This extended Seattle’s help defense, made them hesitant to trap and throw multiple looks, and forced them to play Durant straight up with the shorter Hersey Hawkins (11 points, 4 rebounds, 4 assists, 4-14 FG), older Schrempf, or slower Sam Perkins (5 points, 5 rebounds, 1-9 FG, 1-9 3PT). With no real rim defender to provide help defense, Durant was left on an island to operate.

2) This varied the Thunder offense for the first time this series. Durant is an underrated passer, putting the ball in his hands gave the Sonics different problems that they were ill prepared for. How would they defend Russell Westbrook (26 points, 6 assists, 5 rebounds) in space? How do they play Harden who is now roaming free in the half-court?

The third quarter was more of the same, initially. About mid-way into the quarter George’s Karl random lineup rotations finally paid its dues, and the Sonics mounted a comeback. With Vincent Askew (8 points, 6 rebounds) leading the charge, the Sonics tied the game with 1:30 left after being down by 14 earlier in the quarter. Making back-to-back threes, Askew gave the Sonics their first lead since 10-8. It’s too bad that charge was all Seattle had left, because the fourth quarter turned into a beat down.

Can Seattle set the tone in Game 7?

The Sonics held an 85-80 lead with 9:16 left in the game. Then the bottom promptly fell out. Perkins, Schrempf, and Hawkins all missed ill-advised shots. Payton and Kemp, clearly the focus of a frenzied Thunder defense, could not convert anything inside or outside. Seattle attempted four shots inside the paint, compared to 15 (!) outside of it (of which they made two). The Thunder took full advantage, pulling away on a flurry of converted offensive rebounds, and easy jumpers.

Seattle has to believe that this was the worst game they could have played. Small contributions from players like Snow, Ford, and Askew on any other day blows this game wide open. Alas, key strategic moves by Scott Brooks, aggressive play on both ends by the Thunder, and Serge Ibaka finally outplaying Shawn Kemp has OKC on the verge of Seattle fans seeing Denver in ’94 all over again.

Player of the Game: Kevin Durant. A triple-double will do it, but it was KD’s control of the game’s ebb’s and flow’s that was worth admonishing.

X-Factor: Scott Brooks. After being taken to the woodshed about his subpar offensive resume, Brooks made the necessary adjustments, keying the Game 6 win. Kudos for also out coaching George Karl.

You Have To Do Better: Sam Perkins. When Seattle is at its best, Perkins is setting the tone from outside. He’s their most consistent outside threat. Seattle may not survive if he plays like this again.