Down double-digits early, the '96 SuperSonics didn't back down. Instead they dug deep, overcoming Kevin Durant's 42 points and early Shawn Kemp foul trouble, for the Game 7 win.

Sonics Rising and the good folks over at Welcome to Loud City had a friendly debate about the merits of a ’96 Sonics vs. ’12 Thunder matchup. Both sides made some compelling arguments, but as they say, that’s why they play the games.

The team over at www.WhatIfSports.com ran a simulated seven game series to determine who the best team is/was. This week, we’re continuing to recap those simulations in a somewhat fantastical fashion.
Game 1 | Game 2 | Game 3 | Game 4 | Game 5 | Game 6 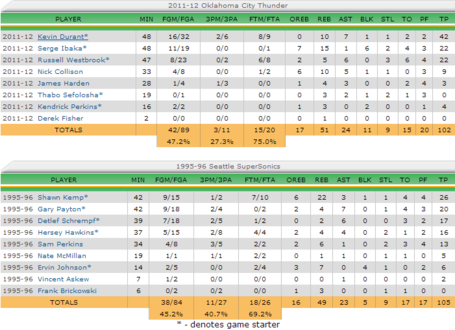 Resilience. It’s a trait that comes with overcoming adversity and bouncing back from failures. It’s a trait that this 1996 Seattle SuperSonics team has from experience. They've been here before. The "here" I’m referring to is being up 3-1 in a series, losing a close Game 5, and subsequently losing by double-digits in Game 6.

Different opponent, same game. The similarities from the 1996 Western Conference Finals series against the Utah Jazz and this matchup against the 2012 Oklahoma City Thunder is surprising. Shawn Kemp scored exactly 26 points in both games. Both Sonics opponents starting power forwards (Karl Malone, Serge Ibaka) and point guards (John Stockton, Russell Westbrook) scored exactly 22 points each. In both Game 7s, the Sonics players that scored in double digits were Kemp, Gary Payton, Detlef Schrempf, Hersey Hawkins, and Sam Perkins. Mind you, that is also the order in which the scorers were listed (highest to lowest).

You know where this is going. Both Game 7s were back-and-forth affairs. Ultimately both Game 7s also ended the same way. Shawn Kemp free throws, a miss from the opponents star (Karl Malone, Kevin Durant), and a single-digit Seattle SuperSonics win.

You've probably grown accustomed to how these ’96 Sonics/’12 Thunder games start. Oklahoma City comes out the gates on fire, though Game 7 was especially hot.

The Thunder took the early lead behind a collective effort of the entire starting lineup. Ibaka (22 points, 15 rebounds, 6 blocks), Westbrook (22 points, 6 assists, 6 turnovers, 8-23 FG), Durant, and even the "dynamics duo" of Kendrick Perkins (4 points) and Thabo Sefolosha got in on the action. The Sonics stopped the bleeding with a timeout with just over 8:00 left in the quarter, but not before the Thunder led 14-5.

The Thunder were smart to take the Key Arena crowd out of this one early, letting their defense take the charge with four blocks and four steals in the period. OKC contested everything outside and deterred every attempt near the paint. By the end of the quarter the Thunder had stunted any advantage the Sonics had, from playing Game 7 at home, with a 32-17 lead.

To put things into context, George Karl had to insert Frank Brickowski in for the last 4:18, because Kemp was already in foul trouble.

Things would get worse before they got better. OKC’s defense was stifling enough to force Brickowski into a three-point attempt early in the second quarter. Karl immediately replaced him.

The Sonics finally started to chip away at the lead after that blunder. As the Thunder defense continued to funnel the Sonics’ shot attempts outside the paint, those shots began to fall. Hersey Hawkins (16 points, 4 rebounds, 4 assists, 2-8 3PT) and Sam Perkins (13 points, 6 rebounds, 3-5 3PT) led the way, with Mr. Sonic himself, Nate McMillan (5 points) contributing a three of his own. The Sonics were able to whittle the lead down to seven by halftime.

The Sonics' offense led the charge

Throughout the series there were flashes of offensive explosions by both teams, a run here, a run there. That is until the third quarter of Game 7. In the highest combined output of any quarter in the series, the stars of each team shined the brightest.

Westbrook forays into the paint were as effective as ever and Ibaka taking and making (his 19 FG were the most in any game in this series) plenty of mid-range shots buoyed the Thunder in the third, but it was Kevin Durant that stole the show. After scoring 18 points in the first half, Durant (42 points, 10 rebounds, 7 assists, 16-32 FG) scored 14 points in the third quarter alone, getting off any shot he liked. A contested pull-up three pointer? Yes. Dunk in traffic? Sure, why not? Spot up three? Well, thank you sir. Against a Sonics defense that tried effortlessly to stop him, Durant was a beast.

Of course when your team scores the most points in any quarter by either team in this series (45 points) and turns a seven-point deficit into a six-point lead, you tend to take that lack of defense with a grain of salt. Seattle was masterful in the third on offense, and you can thank Shawn Kemp and Gary Payton (and a sprinkle of Detlef Schrempf) for that.

After early foul trouble Kemp (26 points, 22 rebounds) exploded with 14 points of his own in the quarter. His work on the offensive boards (6) kept the Sonics train rolling early, but the Kemp/Payton pick-and-rolls and his timely assists to Detlef were the key. The Thunder again struggled to contain Kemp’s rolls into the paint, frequently succeeding the middle of the lane to him. Kemp moved the ball expertly when the Thunder attempted to proactively cut under his knifing into the lane. This twice led to uncontested shots for Schrempf (17 points, 6 rebounds), which later in the quarter gave Kemp easier attempts at the rim.

Payton (20 points, 7 assists) was clutch in his own right, at one point scoring 7 straight points to extend the Sonics first lead of the game. But it was his control of the floor that really left an lasting effect on the game. He was heady in his pick-and-roll play and directed the offense even when he was without the ball, setting himself up for easy mid-range looks. Those mid-range looks further stretched the Thunder defense, which continued to feed Kemp's dives to the rim.

In Games 5 and 6, Seattle held early fourth quarter leads only to let it, and the game, slip away. It began that way in Game 7 too. A 12 -4 run gave OKC back the lead with 9:00 left in the game. After a Sonics timeout, no team would gain a lead larger than three for the remainder of the game.

Even after the timeout Seattle could get nothing going on offense, scoring off tip-ins and free throws. Until two back-to-back threes from Hawkins and Perkins gave them life. OKC leaned on Durant, as the Sonics stuck with the single-coverage defense via Detlef. Seattle missed four straight shots and turned the ball over three times in the last three minutes. The Thunder just couldn't take advantage, as they missed seven (!) straight shots in the same time period.

OKC had time for one last shot. A crucial Seattle defensive lapse left Durant coming free off a screen from Kendrick Perkins. Durant, getting the ball on the left wing, with literally no one in front of him. He fired a three at the buzzer, it careened off the rim giving the 1996 Seattle SuperSonics the Game 7 win, and the series.

Experience was the deciding factor

Oklahoma City has some hard questions to answer, after a falling apart behind another Westbrook "hero-ball" binge in the last few minutes of the game. Why did Durant not see the ball (until the last shot) for the last four minutes of the game? Why did Westbrook continue to take four more jumpers after already missing five of his seven previous shots in the quarter? Where was James Harden (3 points, 1-4 FG)? In the end, outside of Durant and Ibaka, the Thunder’s supporting cast proved to be uneven when it matters the most.

Meanwhile this ’96 Sonics team can be satisfied knowing that when the going got tough, their veterans could stay going. Because, of course, they had been "here" before.

Player of the Game: Shawn Kemp. He dominated in this series, in particular on the boards against a younger, skilled, athletic frontline. He consistently came through when it counted.

X-Factor: Depth. Every Sonic played a key role in this game. Ervin Johnson (6 points, 7 rebounds, 4 blocks), Nate McMillan, Brickowski and the supporting cast did their part when GP and Kemp struggled early.

You HAD To Do Better: James Harden. Way to come up clutch in Game 7, James. Three points on four shots? His worst performance came at the worst time.