What if the new Seattle Supersonics were an expansion team?

Share All sharing options for: What if the new Seattle Supersonics were an expansion team? 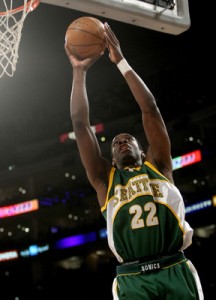 Could the new Seattle Supersonics possibly bring back Jeff Green if he was made available?  Not at the current price.

As Sonic fans we've pretty much been relegated to the thought that the only way the Seattle Supersonics are going to brought back to Seattle is by having an existing NBA team move here.  There has been a little talk of adding a single expansion team into the league.  There isn't a whole lot of support for adding another team to the league, but it has been discussed and the league hasn't completely killed this idea yet.

What if there was expansion?  What if David Stern's final act as NBA Commissioner was to push through the addition of one more franchise in the league?  What if we got our Seattle Supersonics back for the 2014-2015 NBA season?

Let's say we used the same rules that were used when the Bobcats entered the league and predict what players would be potentially available to us from each team and how we could potentially use the first pick in the 2014 NBA draft.

There are some players on this list that you might think I'm completely insane for putting on this list (Kemba Walker?) and there is no way in hell that their team would leave them unsecured during the draft.  I can't argue with you on that front and some of these names are a stretch and it doesn't include potential free agents.  Which means there could be a potential other thirty players that I am completely leaving off this list.  I am also taking into account some cap casualties.

Eric Bledsoe (PG) - Over the past few years he has received a ton tutelage from Chris Paul and Chauncey Billups.  He plays like a controlled Russell Westbrook, but looks to pass first and get his teammates involved.  Can take over a game if needed, shoots 66.5% in the final five minutes of a game or overtime and is 2-2 on his game winning shots (83% better than Kobe Bryant).

Greivis Vasquez (PG) - For me this is a total homer pick, but not without merit.  Vasquez isn't the most talent, nor is he even remotely the most athletic or agile.  Where is lacks in those areas he makes up for in brains, leadership, unreal basketball IQ and extremely hard work ethic.  With his length and knowledge of defensive angles he'll drive opponents nuts, he's a smooth passer and not afraid to take a big shot.

Steve Nash (PG) - He would be 41 years old during this season and probably looking to hang it up.  Why not send him out in a player/coach role.  Give Bledsoe and Vasquez some tips on running the pick and roll.

Marshon Brooks (SG) - I thought Brooks could have eventually been an All-Star in the Eastern Conference.  His minutes are way, way down this year because Brooklyn decided to bring in Joe Johnson.  Brooks has a true shooting percentage of 87% and is a very solid passer into the lower post for his position.  Has solid handles and can run the point in a pinch.

Jamal Crawford (SG) - Need a fearless shooter off the bench.  Crawford is a hometown boy who is currently in his 12th year in the league and is also another guy who is going to probably be looking to hang it up in the next few years.  Why not give him some burn here for a couple of years and let him retire a Sonic?

Derrick Williams (SF) - I really like Williams.  I really, really like this guy.  I think he is in the wrong system and under the wrong coach.  Minnesota has already shopped him twice and he needs a change of scenery.

Terrence Jones (SF) - There still might be some bad blood for him taking more money to join Coach Cal in Kentucky.  He's had some maturity issues, but grew up a lot last season in college and he benefitted greatly from that extra year in school.  He's currently in the D-League averaging 31 points a game and pulling down nearly 10 rebounds.  I think as a back up he'd do just fine on this team.

Thaddeus Young (PF) - The kid is long, has a good post game, can hit the mid-range jumper, rebounds well and plays defense.  He's no Shawn Kemp, but he's definitely no Vin Baker either.

DeAndre Jordan (C) - Up until this year he was an offensive liability that you could only throw lobs too.  He started to put it all together.  He's got a post game and a baby jumper.  He's a monster on the boards, you don't dare drive the lane on him and he's energy personified.

The rest of the roster would be made up free agent signees.

And with the first pick of the 2014 NBA draft, the Seattle Supersonics select Andrew Wiggins, from the University of Florida State (projected).

At the very worst this kid is a five time Slam Dunk Champion.  Reachable ceiling is the best Canadian basketball player ever.  The game is effortless for him, strong work ethic, prides himself in defense and is extremely humble.

If we can't get Eric Bledsoe (which we probably won't, don't think the Clippers will let him go) then we draft Andrew Harrison from the University of Kentucky.

In case this very unlikely scenario does some how come to fruition, what are you thoughts and potential predictions?