Vote: Are pro sports good for the economy? Jon Talton, The Seattle Times

Share All sharing options for: Vote: Are pro sports good for the economy? Jon Talton, The Seattle Times 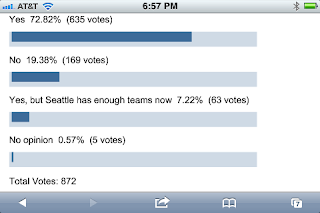 This message was sent to you by [me], as a service of The Seattle Times http://www.seattletimes.com.

Vote: Are pro sports good for the economy? | Jon Talton

There are really good stadium and arena deals, as when the Carolina Panthers pretty much paid for their stadium in downtown Charlotte. And really bad ones, as when the Arizona Cardinals took a taxpayer-funded stadium and put it in the middle of nowhere to help their land speculation plans. Seattle's proposed arena looks somewhere in-between, more on the good side, but the details will still emerge. Having an arena near the other stadiums is also good, leveraging transit and other infrastructure, as opposed to disrupting neighborhoods or sticking it in the exurbs with all the environmental costs associated. Then there's finding teams. I'm not sure the economics can support both the NBA and NHL, but this is a basketball-crazy town (let the anti-Howie comments begin) that misses its Sonics.

Vote: Are pro sports good for the economy? Jon Talton, The Seattle Times

[all of my comments are going into moderation]
(update 2/26/2012 from twitter:
â€œ@Ryan_Lillis: #NBAKings #arena talks to start at 3 pm at Waldorf in Orlando. Mayor, Stern, Maloofs, Clay Bennett in the room. Will update blog soon.â€)
[another update: 2/26/2013, 7:25 pm
â€œ@Rob_McAllister: Gavin Maloof just told me "Ware not there yet" The three brothers were on a walk by themselves near pool.â€]