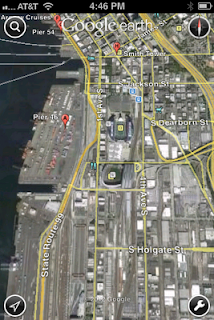 Is it a viable and better alternative, or not? That might not really matter. It is a reach for 88 achres of the Seattle waterfront.

John Torrance, whose vision for a retractable-roof stadium in Seattle led to the eventual construction of Safeco Field, has come up with a detailed plan for construction of a new arena and convention center on the Seattle waterfront.

Torrance, a senior vice president for CBRE, the commercial real estate giant, has guided creation of a plan that would turn 88 acres of Port of Seattleâ€™s Terminal 46 into a convention center and an arena, with provisions for a new cruiseship terminal and waterfront park.Â  The arena could house the NBA and NHL teams that Seattle covets and the convention center would be designed to catapult Seattle up the list of convention cities.
. . .
â€œHansen deserves credit for coming up with a possible plan to address the arena issue but what weâ€™re hoping to do is address both arena and convention center on a potentially world-class site, without any risk of taxpayer obligation.
Flyn'n's Harp: Torrance has new Seattle arena-convention center plan

It's an interesting idea, not a plan. Plans around here tend to already have control of the property they are hoping to develop. Chris Hansen's SODO property is under his control and already zoned for stadiums. The Washington State Convention and Trade Center already has rights from King County to expand across the street from their current location (and hotel tax funding).

There are also regional considerations when it comes to the port.

It looks like a good idea that doesn't have any control over what it would want to do and is the path of the greatest political resistance I can think of right now.