King County Councilman Bob Ferguson (standing) answered a variety of questions from a pretty good size crowd at North Seattle Community College. Both Mr. Ferguson and Seattle City Councilman Mike Ã“Brien did well to keep the room from getting out of hand, where at times there were people yelling, and at times clapping.
Both men returned to the point that they need, and will get, better data to inform their opinions. The question about where the Port of Seattle's data is to backup their claims.
The arena proponents (you) just pay closer attention than the general public, so, the repeated questions about Key Arena can be frustrating. I know it is an old subject to you, but know that some people there really do feel like this is "all of a sudden". 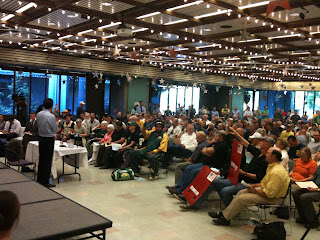 Mike Ã“Brien (below) fields questions from the media, after the meeting. 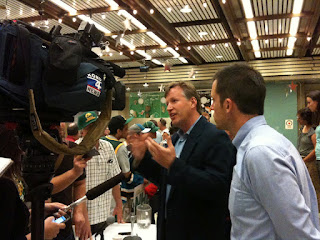 In general, both appeared to be interested in making the arena work at the proposed location. Always a good sign.