How the NBA Luxury Tax Relates to the New Sonics

Share All sharing options for: How the NBA Luxury Tax Relates to the New Sonics

Ever since the NBA instituted the luxury tax in the 2002/03 season, there have been only seven teams that have never paid the tax.  With how recklessly the NBA spends money and how some of the teams on that list spend, you’d expect at some point in time they would have paid the luxury tax.

The Wizards have never paid the luxury tax despite the ungodly amount of money they paid to Gilbert Arenas.  His knees would never live up to that contract. Said contract became so insane that it could only be traded for Rashard Lewis’ equally terrible contract-and we know how that story played out for both guys.

Charlotte is another team that hasn’t paid the luxury tax.  Chicago hasn’t paid yet either, but that’s going to change come the end of this season.  You can lump in Golden State and the Clippers in the same boat.  New Orleans has never paid the tax either (well, with how cheap/broke George Shinn is. it really shouldn’t come as a surprise).

The last team to have never paid the luxury tax used to play in our great city.  Despite having more than enough money it wasn’t part of Howard’s plan to over pay for talent, but rather to find the best talent for the best value.  He was able to keep Ray Allen on a modest contract for his talent level (and the last big contract in the middle of Ray's prime).

Celtics, Nets, Warriors, Lakers and Knicks are going to be paying the luxury tax this coming year.  The Lakers are about to pay into the tax this year to the tune of $85M.

That’s more than any current team in the NBA pays in player payroll!

Not sure how the luxury tax actually works? Here’s a chart I picked up from CBA Guru, Larry Coon:

It might be the cheap skate in me, but I don’t think going over the salary cap is worth paying a potential 475% tax on it.  I also am not part of an ownership group that is worth upwards of $25 billion.

The Lakers, Celtics and Knicks really do not care about that though.  They have more than enough coming in from their profits and television contracts.

The Lakers definitely don’t care about that $85M in tax.  They’re going to profit from $150M to $200M on ticket sales, merchandise, etc. and another huge sum of money from their television contract.  If they wanted to add Durant and LeBron to their current team and pay them max plus contracts they could and would still make over $100M in profit.

Now, look at the cap-dumping trade that Memphis did this week.  They rid themselves of three guys on rookie contracts (Selby, Ellington and Speights) to the Cleveland Cavaliers.  In return, they received Jon Leuer and his very affordable contract that comes in just a shade under $500,000.

Guaranteed this is not the only time you are going to see a couple of small market teams do a salary dump trade before the trade deadline on February 21st.

How does this relate to the Sonics?

Seattle has really never been able to outbid other teams for free agent players or coaches.  It was how we lost Nate McMillan to the Blazers.  We were able to, however, outbid ourselves and pull in the forever-unforgettable Jim McIlvaine contract.  To me that’s all he was.  He was barely worth the ink that he signed his contract with.

Fun facts to impress all your friends later with: 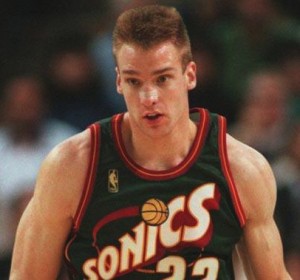 Not very many, if any, fond memories of this man when he roamed the paint in Seattle.

Now back to our new ownership group.  Sources close to me have said that Hansen and Ballmer are not going to worry about the luxury tax.  Their main goal is to create an elite franchise from the ground up and win multiple championships.

Hansen and Ballmer did not stumble into their massive amounts of wealth.  They worked hard, they worked smart and they knew when to take a risk.  They surrounded themselves with people who they knew were like them and that would succeed.

The rumors are spinning that Phil Jackson is likely to become team president and Hansen/Ballmer are going to steal RC Buford from the San Antonio Spurs.  Jackson and Buford both either played, coached or presided over 17 NBA championships.

Now that would be an extremely solid foundation in which to start the 2.0 organization in!  (We can delve into how to rebuild the organization at a later date).

A lot of this is going to depend on how profitable the team will be and how lucrative the television contract is, amongst other financial factors. But how sweet would it be to completely not care about the salary cap and luxury tax and outbid the Thunder for Kevin Durant in 2015?