Share All sharing options for: Michael Cage - A Trip Down Memory Lane

There are some things as a child you hear that just stick with you forever. For some reason one line my dad told me when I was probably nine years old has stuck with me until this day. Rarely do I ever think about it, but tonight I did. 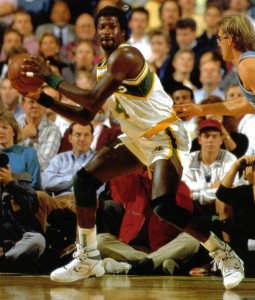 Michael Cage dominating the the paint like a real man. He was known as "The Windex Man" for his pension of rebounding or keeping the glass clean.

I was shooting hoops at the RAC tonight with my buddy Spencer. We were just messing around and he was working on his bank shot and I said the line that my dad said to me 22 years earlier.

"You have to shoot the bank shot like Michael Cage."

Not Tim Duncan, whom is probably the best bank shot artist of our era. I told him to shoot the bank like Michael Cage.

Cage spent seven years in Seattle (88-94) and was never really known for his offensive game. He only scored 20+ points eight times as a Sonic, scoring 24 points three times. All those games came in the calendar year of 1989. He arguably had the meanest Jheri Curl in the history of the game.

His career high in points came in his fourth season in the NBA with the LA Clippers. He reached 26 points on January 6th, 1988 in a road loss to the Cleveland Cavaliers.

As a pro he averaged only 10.0 PPG, a solid 10.5 RPG while shooting 51.5% from the field and 66% from the line. Amazingly he attempted only two threes in his career and unsurprisingly missed both of them.

Cage developed the nickname "The Windex Man" while he played in Seattle. He was an absolute beast on the glass, cleaning up everyone's shots, thus garnering his given nickname.

The only story I ever heard about Michael Cage is how he would buy everyone fried chicken on the road. Sometimes even having room service deliver it to his room at two or three in the morning. I cannot confirm if those stories are true. Just another one of those things a kid hears and doesn't seem to ever forget. Things you hardly ever think about, but will always be in your head somewhere just waiting for that right trigger to pull it to the forefront of your mind. Just like Michael Cage.

Cage will never be a hall of famer, but he was an extremely solid pro player. His legacy will mostly live on with us die-hard Sonics' fans. Maybe in 2017 we can draft his son, Michael Cage Jr. MCJ as he's called on the AAU circuit is the #1 ranked 9th grader in the country and already being talked to by schools like Kentucky to join their program when he starts college in 2016.