A look at the upcoming season and a preliminary report card on Wednesday's inaugural draft.

Share All sharing options for: Sonics Bruising: It Finally Begins

The excitement has been building and the time has finally come. Two leagues will finally begin their seasons tonight - the National Basketball Association and the Sonics Bruising League. For the SBL, it's the first season ever.

The owners are in place. The franchises are named. The initial rosters are set.

On Wednesday (October 23), we held our first draft to much fanfare. When I say much fanfare, I actually mean no fanfare, but at least our owners were excited.

So here we go. Let's talk about what the league is about, who our owners are, and how they did in the draft.

RULES OF THE LEAGUE

Our cup is the broken nose, the cracked ribs, the knotted forehead, and the punishing knee to the groin that we give to every flop-happy scoring enthusiast who dares to come into our paint.

In other words, the Sonics Bruising League is a celebration of this...

It's not that the elite scorers, such as Kevin Durant, aren't valuable assets to a franchise. It's that bruisers are much more valuable. We like fouls, blocks, fouls, steals, fouls, rebounds, fouls, fines, fouls, ejections, fouls, suspensions, and fouls.

Here is a summary of how our teams score points:

To flop now is to purchase a flagrant later.

We have two divisions named in honor of a pair of iconic SuperSonic enforcers - Xavier McDaniel and Paul Silas. Here is a list of teams in those divisions with their Sonics Rising owner identities in parentheses. 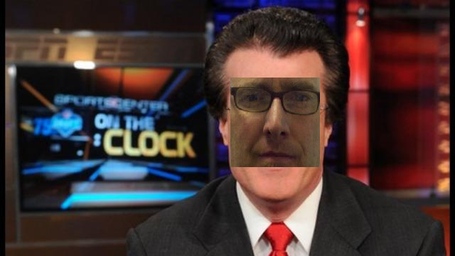 Mel has a kid brother. He is more handsome, less well-known, and earns much less money. He also happens to be a self-proclaimed Sonics Bruising draft expert. In order of selection, his first round report cards for each franchise are below. I would like to tell you that he will also grade the later rounds, but he is far too lazy to put in that kind of work.

You'll probably notice that he's a smarmy little twit, just like his big brother. Don't tell him I said this, but I hope that those franchises who receive a bad grade from this "expert" rack up a heck of a year, throw it in his face, and rub it all over his nose like a stinky sock that's been worn for a couple of days. He is so completely full of crap.

1 - Team Heaney: If this were one of those other leagues, using the top pick in the draft on Kevin Durant (SF) would've been a no-brainer. I really have to scratch my gel-crusted head on this one, however. Sure he averaged 7.9 rebounds last season. Sure rebounds are worth 2.5 points in our league. But Durant is more of a classic scoring threat than he is an enforcer. I had Durant rated ninth on my Embiggened Board. Not a disastrous pick, but a bit of a reach in a league like SBL. GRADE: B-.

2 - Seattle Team Stealers: I can't believe that Durant and LeBron James (SF) were the top two picks in the SBL. Can't freaking believe it. This is exactly what would've happened in any other league. Once again, not a catastrophic pick due to James' 8 rebounds a game last year. But once again a reach. I had James going 25th on my Embiggened Board. GRADE: C+.

3 - Team catdawg: Now we're getting somewhere. Dwight Howard (C) towered menacingly at the top of my Embiggened board because of his 12.4 rebounds per game and 3.8 personal foul average. The GM of Team catdawg has a keen eye for personnel and benefits from the two preceding questionable picks. GRADE: A+.

4 - Baltimore Bullets: Here is my "I can't believe the Colts didn't draft Trent Dilfer" moment. James Harden (SG) is a terrific player in the NBA. He may push the Rockets into the Western Conference Finals or even further. But in the SBL? Harden? He averages only 4.9 rebounds and 2.3 fouls per game. Some players can make up for this with blocked shots, but he only blocks one every other game. He is so far down on my Embiggened Board that I'm not going to take the time to look it up. GRADE: D.

5 - Team Beatty: Wow. At least Harden is a good scorer, which is good for a half point per point in our league. Chris Paul (PG) averages only 16.9 ppg and barely registers in the statistics of record for the SBL. He's a great point guard and his 9.7 assists per game represent his strong suit as a player. Unfortunately, we don't like assists in Sonics Bruising. We hate them with the fire of a super nova and we choose not to consider them in our scoring formula. GRADE: F.

6 - Paul Rogers: Here is decent value at this point in the draft. I ranked Roy Hibbert (C) high on the Embiggened Board because of his per game averages of 8.3 rebounds, 3.5 fouls, and 2.6 blocks. The fact that Paul Rogers is the commissioner of the league and I wouldn't have a job without his approval barely factors into this grade. I mean hardly at all. GRADE: A.

7 - Seattle Glove and Hate: Quite simply the steal of the draft so far. I don't know why DeMarcus Cousins (C) slipped five spots on the Embiggened Board. He is big and is emotionally unstable, which is great for things like technicals and flagrant fouls. He's the whole package. He can throw all the punches. His averages of 9.9 rebounds and 3.6 personal fouls provide excellent value for the seventh pick of the draft. GRADE: A+.

8 - Team Smith: As emotionally unbalanced as Cousins is, Larry Sanders (C) may be the better all around SBL player with his 9.5 rebounds, 3.3 fouls, and 2.8 blocks per game. His advantage over Cousins lies in his shot blocking prowess. Good value for this spot in the draft. GRADE: A+.

9 - The Nephew: Brook Lopez (C) will be a decent center in the SBL. Not great, but decent. He's a good scorer and puts up a decent showing in the metrics we care about, averaging 6.9 rebounds, 2.1 blocks, and 2.1 fouls per game. Lopez won't be a world beater and he won't be terrible. The middle of the first round seems a little high for him. All and all, not a bad first effort for the commissioner's nephew. GRADE: B-.

10 - Manmade Seacows: Amir Johnson (PF) averages a decent 7.5 rebounds per game and a very impressive 3.7 fouls per game. I can hear the sound of his hand slapping an opponent's wrist as I write this. Fouls are so cool. Decent value at this spot in the draft. GRADE: B.

11 - Wenatchee Wildmen: I have no idea what GM Kevin Nesgoda was thinking here. Stephen Curry (PG) is a very good NBA guard, but is a real head scratcher in the first round of our league. It's almost as though someone broke into Nesgoda's war room, put all of the draft cards in a garbage can, shook them up, and put them back on the board in no particular order the night before the draft. GRADE: F.

12 - primetime Sheed's: Man. Russell Westbrook (PG) is a confusing selection at twelve for a couple of reasons. First, he's a guard. In the SBL, guards simply aren't a prototypical first round pick. He's a great NBA player and a great scorer, but that doesn't translate well enough in our league to warrant such a high pick. Second, he's going to miss the first 4-6 weeks of the season due to an injury. GRADE: F.

13 - Team Naessens: Holy crap! 18.3 points a game? 14 rebounds a game? If his fouls per game were a little higher, Kevin Love (PF) could've justifiably been considered a top three draft pick this year. As it is, he is a legitimate top seven player. At the 13th pick, he's a no-brainer. He needs to work on his fouls, but I "love" this pick. GRADE: A+.

14 - The Frozen Envelope: Choosing Serge Ibaka (PF) at this point in the first round is difficult to argue with. He's a decent rebounder with an average of 7.7 per game and a terrific shot blocker at 3 per outing. Here's hoping that he spent a good portion of the off season working on his personal fouling game, because he needs to raise his level of play to be considered as a higher pick. GRADE: B.

15 - Team Meirose: Carmelo Anthony (SF) is a prolific scorer, but he brings other things to the table. His per game averages of 6.9 rebounds and 3.1 fouls, combined with his 28.7 scoring average, make him an adequate late first round pick in this league. GRADE: B.

16 - Bothell Beavers: Dirk Nowitzki (PF) averages a respectable 6.8 rebounds per game, but his other metrics don't register well enough in our league to warrant his selection in the first round. I had him rated much lower. A reach at this point in the draft. GRADE: C.

Our league pits teams against each other one week at a time. We will be doing weekly roundups of game results, playoff standings, transactions, tidbits, and weekly affirmations. We will also publish one of our Sonics Bruising Core Values in each roundup. The regular season is 19 weeks long.

This is going to be fun. I hope you enjoy it.