Stick with me. It's not a wheel of fortune... but it may be worse.

Share All sharing options for: The NBA Draft Wheel?

When I first saw the headline on Grantland about the NBA discussing creating a "Draft Wheel," my first thought was seeing 29 NBA General Managers standing by as Daryl Morey spins a giant, 30-paneled wheel and yells out "Big money! Big money! No whammy!" Turns out, the system may be even more ridiculous. Then again, it may be so crazy that it just... might... work.

According to Zack Lowe, the NBA is internally discussing change the draft system to discourage tanking. Their solution is to have each team have a set pick each year, with a system that would only refresh once every 30 years. Teams would know where they will be picking every year for the next three decades, and thus have no incentive to try and lose. This would also eliminate the act of protecting draft picks in trades. Each team would be guaranteed a top 6 pick every 5 years. Here is how the cycle would look, courtesy of the Grantland article; 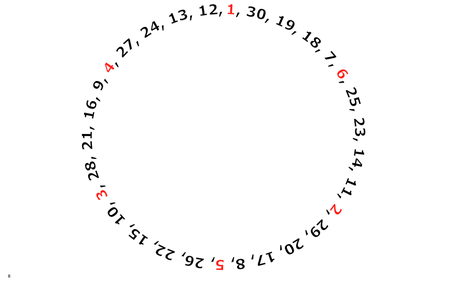 While I do believe this would eliminate tanking, it could also eliminate hope for a bottom-feeding team for up to half a decade. Let's take the team who selected third in last year's Draft, the Washington Wizards. The Wizards may be able to sneak into the playoffs this year, but that's more indicative of the Eastern Conference's futility than it is of the Wizards' progress. You would be looking at the 28th, 21st, 16th and 9th pick in the next 4 years. It's very doubtful that the team would find players in those spots that would push them over the edge. How would fans feel knowing they won't be able to get a franchise-changing player (apart from a trade) for 5 more years? The upside to losing is knowing that as the losses add up, so do the ping-pong balls, increasing your chance of getting that coveted number one pick. Losing with no hope in sight can get very tiring very fast.

On the flip-side, what if the Miami Heat had the number 12 pick last year? That would give them the number one pick this year. Can you imagine taking the reigning champs and plugging in Andrew Wiggins? Just hand over the Larry O'Brien trophy now.

The wheel would not take effect until all current draft-day trades are complete, so it'd be close to a decade until it actually happened (thanks, Knicks and Nets!) Is it perfect? No. Would it work? Maybe. Is it better than the lottery? Probably. I give the NBA credit for trying to fix a clearly broken system, and I know tanking has become the latest hot button topic, but I'm not sure this is the most effective way. Let's talk more about that wheel of fortune idea in the comments section.