Share All sharing options for: Dana Barros: A Trip Down Memory Lane

It was a big day for us Sonics’ fans today with the court victory over the ILWU.  I want to change gears a bit though, take you by the hand and take you back down on a stroll of memory lane.  Tonight we’re going to take a look at the 16th pick in the 1989 NBA draft, Dana Barros.  He was the fourth point guard taken that year behind Pooh Richardson, Mookie Blaylock and Tim Hardaway.

Barros only played four years with the Sonics, his best year coming in his rookie season. 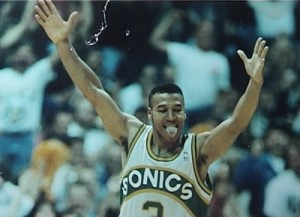 When Barros played he was always high energy.

We all remember Dana as a hot shooting, point guard from Boston College.  He started 25 games for the Sonics in the 89-90 season and during 17 of those games he was red hot.

Unfortunately those 17 games were probably the best stretch that Barros had with the Sonics.  He only averaged 7.3 points per game for the final 20 games of the season and didn’t start at all in his second season and played significantly less minutes as the Sonics decided to play some guy named Gary Payton a bit more.

He could never really crack the lineup that much with most of the minutes going to Payton, Nate McMillan and Ricky Pierce.  He started to become the odd man out in the back court.

Barros played a total of 291 games as a Sonic, averaged 8.1 points per game over his four seasons and was eventually traded to the Charlotte Hornets as part of the Kendall Gill trade.  He was traded to Philadelphia two days later.

Random note and not a pretty one: The Sonics were 0-5 when Dana Barros scored in the double digits in the playoffs.

Barros currently works in the front office for the Boston Celtics as part of the their media division.