Share All sharing options for: Hawesome Night! Spencer Has 17 Boards In Win 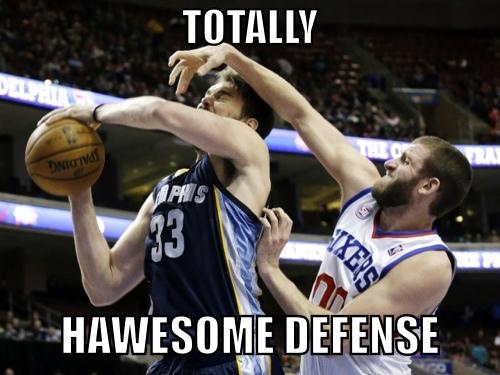 Not from tonight's game against the Bucks obviously.
Credit Getty Images

We are going to try something a bit new going forward until we get a team (officially). Tonight we are going to do a bit of a locals only review of the games from tonight. So if we'll be checking out players who come from the Seattle area or have been a Sonics at one time or another.

Sadly for all you Larry Stewart fans, he will not be appearing in this edition.

Reggie Evans: 22 points and 26 rebounds... Definitely tonight's winner of the best former Sonic award. Danny Fortson is out there with a big smile on his face.

Nate Robinson: 14 points off the bench as the Bulls ended the Heat's 27 game winning streak.

Jeff Green: Had 21 points for the Celtics and hit a game winning layup at the buzzer! Bring him back to Seattle? Kevin Durant only shoots 27% against him on 82 head to head possessions.

Spencer Hawes: 15 points and a whopping 17 rebounds in a win over the playoff bound Bucks! Hawes has really been coming on strong lately and playing some of the best ball of his career. I know we have a small movement to get him on the Sonics for next season, but we have to wait until at least December 15th if we trade for him or wait until June 30, 2014. Former Sonic, Damien Wilkins chipped in 18 points for the 76ers.

Jamal Crawford: Had 13 points off the bench tonight for the Clippers.

Terrence Ross: Had 13 points and five boards off the bench for the Raptors tonight.

Quincy Pondexter: Had a solid 10 points off the bench for the losing Grizzlies tonight.

Nick Collison: +19 on the +/- scale tonight for the current Seattle resident.

Jason Terry: Only five points off the bench.

Marvin WIlliiams: Had a whopping five points off the bench for the Jazz tonight.