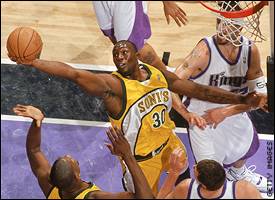 After his 22 points and 26 rebound performance I just had to get Reggie Evans some love up on this site today.

Reggie is one of those guys who hate to play against, but absolutely love him on your team type of guys.

He was never a guy that would wow you with stats, but he would wow you with his work ethic and his hustle. There wasn't a post player that he didn't think he could guard and when he was teamed up with Danny Fortson you just knew stuff was about to go down.

What are you favorite Reggie Evans moments as a Sonic?