Every team needs a place to play, but Seattle's Chris Hansen is pushing the envelope on just what an arena can and should look like.

Share All sharing options for: Proposal for Seattle's New Arena

The Key Arena has served Seattle well for half a century, but by modern professional sports standards the facility falls short, particularly in the ability to generate revenue. Part of bringing an NBA team to Seattle (and hopefully an NHL team as well someday) requires something to replace this storied facility.

For Seattle's Chris Hansen, it isn't enough just to put up a cookie cutter box to house sporting events and other various large group gatherings. Doing just enough to get by doesn't ever seem to have entered into the equation. On March 29th via SonicsArena.com Hansen rolled out his most detailed plans yet for what the new Seattle Arena may look like. 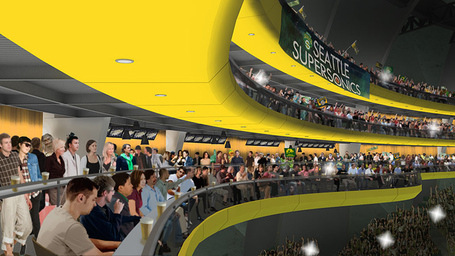 The key element from these new plans are the Sonic Rings. The intent of these rings is for:

The proposed new arena would be one of the largest commitments of private capital ever made for a project like this in North America. It has been estimated that arena construction and development will create 2,000 high-wage construction jobs and hundreds of full and part-time jobs to operate the Arena. The surrounding region will additionally benefit in many other ways from taxes (Hotel, Rental Car, etc) to patrons spending money in surrounding business before and after events.

The arena as proposed would be a fantastic venue not only for NBA and NHL sporting events, but would be great for things like NCAA basketball tournaments, and other large regional events that need to be hosted in an indoor space. The sight lines should make it an exceptional arena concert venue as well.

If you are interested in knowing more, or even better yet would like to get on the waitlist for Sonics Priority Tickets, head over to SonicsArena.com and get involved!