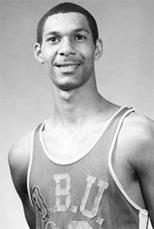 As a warm up to Mr. Baker's column tomorrow and to get off the ILWU/Sacramento topic for the evening.  Let's take a quick peak at the first ever Sonic, Al Tucker.

He was the Sonics first ever draft pick back in 1967.  He averaged 13 points a game his rookie year and a little over 10 points in his sophomore and final year with the Sonics.

He is most famous for being the inventor of the alley-oop with his brother, Gerald, while at Oklahoma Baptist University.  As fans of the Sonics, we should know what a truly beautiful thing that the alley-oop is.

The man does deserve a bit more fanfare, but I will cover that in another piece.  Also, I'm going to start adding history elements on the site.  Keep an eye out for that.