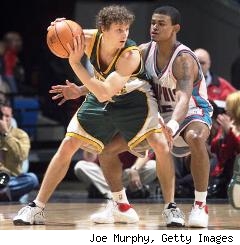 Ridnour vs. Watson. A debate that will rage on in Seattle for centuries.

Even after five long years this debate is still brought up from time to time.  Even five long years later talking about Jerome James we can't help but bring up the Luke Ridnour-Earl Watson Debate.

What if I gave them their own time now?

Yes they are on separate teams right now.  Luke Ridnour is the starting shooting guard in Minnesota and Earl Watson is a spot starter at point guard for the Utah Jazz.  The Timberwolves are not a playoff team and if they don't draft Ben McLemore from the University of Kansas, David Kahn should be fired right after the draft pick is announced.

This of course means that Ridnour will no longer be a starting shooting guard in Minnesota, but more of a spot player at both guard positions.  Still no playoffs for him.

Watson is currently on pace to make the playoffs with the Jazz.  He and Jamaal Tinsley have gone back and forth as the starter in Utah for most of the year.  It does appear that Jazz will make the playoffs as either the sixth, seventh or eighth seed.  I personally think they are going to make the seventh seed and lose in six to OKC.

Ridnour never played in Oklahoma City, he was traded to Milwaukee during the course of the relocation.  In the five seasons since Ridnour has left the Pacific Northwest he has played in a total of 335 games (226 started), shot 45% from the field, 36.5% from three, 87.6% from the FT line and has averaged 11.11 points per game.  He's actually been a fine complimentary player in his times away from the Sonics.  Ridnour should have never been a starter. His best statistical season came in the 09-10 season where he came off the bench 82 times.

So, does Ridnour finally win?  He definitely gets my vote.