I-91 Lawsuit Dismissed, Sacramento has a new Whale and it's almost 5pm

The judge throws out the I-91 lawsuit, Sacramento has a new "whale" and 5 PM in coming soon.

Share All sharing options for: I-91 Lawsuit Dismissed, Sacramento has a new Whale and it's almost 5pm

As we all expected and much to the chagrin of the Sacramento spin machine, the I-91 lawsuit has been dismissed. This now clears the last major legal hurdle for Chris Hansen and company to start getting building the soon to be best new arena in the NBA.

Sacramento announced that former Facebook exec Chris Kelly is now part of the investment group. Just waiting for a new Oprah's favorite things and this to happen: 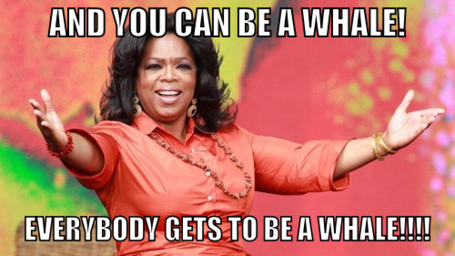 Just waiting for Kevin Johnson to call me right now to be "whale" number 206.

And finally... It's almost 5PM. Will Sacramento get their bid in? Doesn't seem very likely when they are still adding pieces to their very complex and ever evolving puzzle pieces.

Also, let's spread the good words to everyone you know. We need to get some big waves going through Seattle tonight and through the weekend.