Fans contributions are small but have cumulatively made a big difference in Seattle and Sacramento.

In 2008 an admittedly ragtag group of volunteers put on a 3,000 person rally at the Federal Courthouse just 2 weeks before our team departed. This event was the culmination of hundreds of other mini-rally’s, gatherings, television and radio events and meetings. A bunch of strangers had gathered together to make a difference. We were exhausted but had successfully won the hard fought attention of the entire city and it felt amazing. 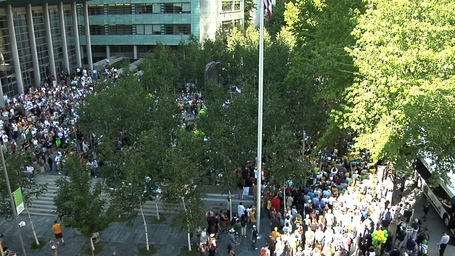 The ultimate insignificance of that event and other attempts make it hard not to be dismissive of the absolutely valiant effort being put forward by Sacramento fans. As impressed as I am by the turnout, the signs and the internet presence I have a strong historical precedent that tells me those things don’t matter. Ultimately this decision will be made based on the strength of the deal and its business implications on the people who were in the room at the St. Regis Hotel last week.

To be dismissive of what they are doing in that way is wrong. While they may not have the money to buy the team or impact the transaction their successful social and traditional media campaign has personalized a transaction that would otherwise be significantly more cold and heartless. Whatever the outcome of this relocation the fans should consider themselves successful in reminding the nation of the significant emotional cost of franchise relocation in any city.

One of the most frustrating elements of being a fan advocate is the lack of awareness surrounding the difference your efforts are making. There are moments where push yourself beyond all limits only to later be overwhelmed by depression when you realize that despite leaving everything you had on the floor your efforts had only a marginal or insignificant impact on the big picture.

Fans in both cities need to understand that huge and daunting projects cannot be completed by a single individual. Rather they rely on a variety of individuals joining together to whatever incremental contributions they can provide to cumulatively make something that seems impossible into a reality.

I’m reminded of game 7 in the 1996 Conference Finals when the Sonics were facing the Utah Jazz. My throat hurt so badly that I could barely talk. Drenched in sweat and exhausted I remember so clearly seeing Karl Malone on the free throw line and thinking "I’m done yelling. I can't yell anymore" But by the time that crowd got to a count of three I joined in screaming as loud as I could despite the pain. With the energy in the building I felt like not yelling would be letting my team down. If I didn’t contribute my voice and we lost the game I would not have been able to forgive myself.

Years later I have had the privilege of personally talking to both Shawn Kemp and Gary Payton about their emotions during that game. Both spoke at length of the extra level of energy the crowd gave them. They talked about the way our voice inspired them to give even more than they would have without us. My voice contributed to a roar that made enough meaningful impact that the vastly more impactful players on the floor look back on as a real difference maker in the games outcome.

Our contribution has varied through the years. In the months and years following the relocation it would have been easy to let anger toward the NBA and bitterness towards the relocation process dominate regional conversation. The outpouring of raw emotional passion that had served us so well during Save Our Sonics would have led down a disastrous path of anger and blame. We needed people to reign in their anger and provide a focused message that reminded everybody that we had fought the fight because we loved the NBA while at the same time steering the conversation towards the mobilization of an army emotionally prepared to participate in the very ugly process of team relocation.

April 19th(ish) will bring a new chapter in this story. One almost unspeakable alternative from the Seattle perspectve is that we will once more have to dig deep and see if the people are willing to regroup and remain in this game for additional years.

More likely (in my opinion) we will face the strange task of retraining ourselves to be great fans instead of great soldiers. .

Fans care more about the draft than environmental law and construction process. They babble endlessly about statistics that are probably insignificant and are moved to comment on the legacy of their franchise and players. They follow the league intently based on the slim chance that their hometown team can swing a big trade or land a critical piece via impending free agency even if it is years away.

Fans always have a belief that their team can win, even if rosters and records indicate that they will probably lose.

I’m going to do a lot of reminiscing over the next 13 days because now is the time to do it. If we want to say thanks or look back on the effort in self-congratulatory fashion we should do it now, celebrating our efforts and accomplishments based on our pride and on their own merits rather than an outcome that we cannot control.

After April 19th I am going to do the right thing and focus on being a great fan again.

If successful It will be disrespectful to the fans of Sacramento to brag or be boastful of that success at a time when they are so hurt. We need to remember that one of the hardest parts of losing a team is helplessly reading over and over about the success of your opponents. We do not want to be those people. While there will be little we can do to make them feel better we do not intend to make them feel worse by endlessly recounting the story of how we fought to take their team.

Moving on quickly will also make a small but meaningful contribution to the franchise' success. When many others who considered buying a team were intimidate by the thought that fans were too bitter, thinking it would be decades before we could recover from the loss of Kevin Durant Hansen believed in us. We need to justify that faith by moving on quickly from the train wreck of the last 5 years and returning to the simple joy of following our team on the court, passing on to our kids memories of Shawn Kemp and monster dunks instead of Jason Reid and court cases.

This does not mean that we should give up the relevance we have fought so hard to achieve. We need to show up in large numbers to impact the upcoming mayoral primary and use the skills and relationships we have acquired to make sure that our priorities are never disrespected again.

It does mean that we should take advantage of the great tool SB Nation has given us to guide the tone of conversation after the BOG vote. Please support us to set an example to other fans by creating great conversation about basketball and inviting your friends to join in that conversation. After April 19th please make an effort to not engage in conversations that rehash negative history or bring back bad emotions. Let that stuff fade away and talk about the roster.

So get it out of your system now. This is our window to tell each other thanks or to rehash the old times. After April 19th we don’t need or want it.

Thank you to all the volunteers from Save Our Sonics. You taught me that being a fan is about more than the team. Its about sharing a relationship with the people around you in your city and having common cause and mission with strangers. It was a life altering experience and I am a vastly better person because of the impact you all had on my life.

Note: Sacramento fans are welcome to join in this thread, but play nice. - Big Chris