What If Ray Allen's Game Six Three Pointer Against Spurs in 2005 Went In?

The Spurs and Sonics played an instant classic in game six of the Western Conference Semifinals. Where would the Sonics be today if Ray Allen had made the shot at the buzzer?

Share All sharing options for: What If Ray Allen's Game Six Three Pointer Against Spurs in 2005 Went In?

Eight years ago today marks the last time the Seattle Supersonics played in the NBA playoffs. It was game six of the Western Conference Semifinals. The Sonics were without Rashard Lewis and Vladimir Radmanovic, two incredibly important scorers from the outside and who were sorely missed in this game.

This was a game the Sonics should have won. They beat the Spurs in field goal percentage, three point percentage, free throw percentage, rebounds, forced more turnovers, had more second chance points. Everything statistically pointed toward a Sonics victory.

The game was tied 96-96 with 14.4 seconds left. The Spurs in game three had run a play where Manu Ginobili passed the ball directly to Tim Duncan off the inbound at the front of the rim. Duncan attempted a sweeping hook shot that missed.

The Spurs were notorious doing cross cuts in the lane with Duncan to get him open shots in the paint late in games. You knew exactly what was going to happen. 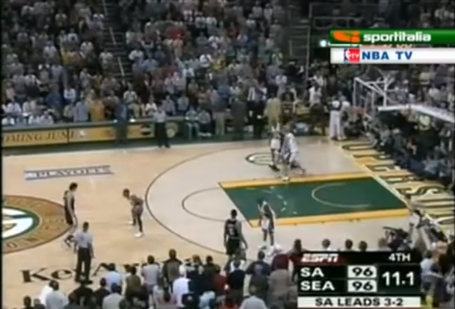 Ginobili would get the ball from Robert Horry and hold the ball, flocked by Seattle's best perimeter defender, Antonio Daniels. Tony Parker and Bruce Bowen would each drift to the corners, Ray Allen and Luke Ridnour both shading toward the paint to help cover Duncan if he got the ball early.

Damien Wilkins was covering Robert Horry at the top right caddy-corner. Horry was always dangerous in late game situations like this and he had to be watched closely.

In the paint it was Tim Duncan being guarded by VItaly Potapenko.

What the Sonics needed to do was force the Spurs into a wild shot and deny Duncan the ball in the paint at all costs.

Ginobili would drive left and Antonio Daniels did a great job staying in front of him and would appear to force Ginobili into a wild running shot or kicking the ball over into the left corner for a Bowen three. Which is okay because it would Ray's job to help Daniels out if Ginobili drove left. Ginobili always drove left. 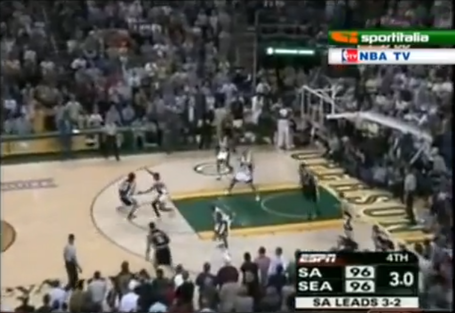 Ginobili did drive to the hoop, Daniels stayed in front of him, Manu left his feet, he was either going to have to put up a wild shot or kick it to the corner for a three. Allen collapsed to Ginobili, Bowen was open in the corner. 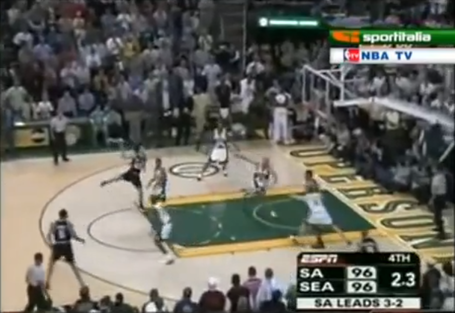 Potapenko also came up to front Ginobili, leaving Duncan under the hoop for an easy layup over Ridnour to put the Spurs up 98-96 with 0.5 seconds left.

At this point we needed a miracle shot and the only guy that could do it was Ray Allen. Everyone knew this was going to be a Ray Allen shot. 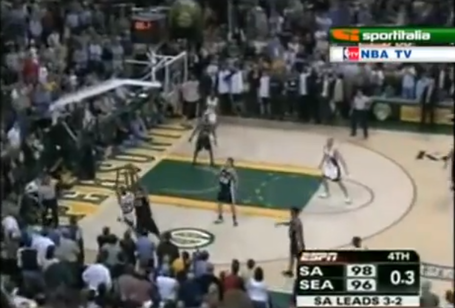 Allen caught the ball off a double screen and curl from Ridnour and Potapenko. Ginobili was originally covering Allen got switched to Potapenko and Duncan was left to charge at Ray as he caught the ball and put up a three from the near corner.

A three that went a quarter in too long and the Sonics lost.

Had Potapenko played proper defense and if the Ray Allen shot had gone down; do we beat the Spurs in San Antonio despite losing the previous three games there by an average of 17.3 points? Do we beat the Suns in the Western Conference Finals? Could we have beaten the Detroit Pistons in the Finals?

I really hate playing the what if game, but so many what ifs come from a shot that went quarter inch too far.