More Perspective: Our Continuing Coverage of Rumors that Could Result in a New Arena filled with NBA basketball and NHL hockey

Why would writers and commenters on an NBA blog spend so much energy and focus on the rumors to bring the NHL to Seattle? The following are my thoughts on Paul Rogers' article Perspective: Our Recent Coverage of the NHL, (50% recycled content from Paul's article)

Share All sharing options for: More Perspective: Our Continuing Coverage of Rumors that Could Result in a New Arena filled with NBA basketball and NHL hockey

At its fringes, Sonics Rising is a community that is here to sift through endless rumors and attempt to read the minds of decision makers while awaiting return the Seattle SuperSonics to their home town and to support them like crazy once they get here, and forget as much of this nonsense as possible. We are about NBA basketball, but we currently have none. It hasn't always been this way. It will be different in the future (that's called hope).

It seems that our recent distraction has been on the rumored, potential, possible relocation of the NHL's Phoenix Coyotes to Seattle. This has caused some people (me) to question the universe, as defined by the permeable boundaries of Sonics Rising. Why would a community that is supposedly so dedicated to basketball turn most of its attention to hockey over the course of two weeks, and sometimes feels like years?

Why are we focusing on this? Why does the NHL matter so much to an NBA Web site? Have we effectively given up on the return of the NBA? Why do the Mariners suck so bad?

Don't ever forget what Chris Hansen is trying to accomplish. He is trying to build an arena to house the Sonics without going broke. For that arena to pencil out financially, however, a second anchor tenant sure would help. From the moment Hansen surfaced over a year ago, he targeted an NHL franchise as a second tenant.

Like at least two of you, I've always pretended that the NBA team would arrive first and all of us, including NHL fans in Seattle, were hoping that it would happen right fricken now so we could get that shovel in the ground and have something to cheer for this winter, and a place to bury the metaphorical bodies of our opponents (things happen, just sayin'). Unfortunately, we didn't get the obvious choice.

Well, kind of first, maybe. The idea of getting an NHL team first is a simple one we will do everything we can do as fans to be a more complex one. I don't know what the immediate impact on the SoDo arena would be, other than to send a message letting them know that the NBA screwed up, and the NHL is beating them to the Seattle corporate advertisers. I don't know if the NHL would come without a guarantee, but that might still be better than Glendale.

I don't know what conversations the prospective owners have had with Hansen, but if they didn't clear this with him and they somehow mess up this situation, then they are going to get screwed in court. I don't know what this would mean for the current MOU, maybe nothing, and the NHL becomes more of a complimentary addition to the existing agreement in the short term.

I just don't know that I want to believe that darn near every half-baked rumor could move the ball closer to the goal. Ugh, but I can't resist the rumors. I'm hooked.

Paul Rogers wrote, "if we get a chance to latch on to one of the major tenants in this equation, we MUST do so. It's much easier to keep a team than it is to get one."

True enough, but does every article have to result in a thousand comments fueled by cryptic tweets with armchair detectives reinterpreting ever @ symbol as a linguistic anchor, shackling my sports lovin' feet, dragging me down to the bottom of an ocean of speculation?

Oh, you bet it does. Like a hummingbird to sugar water, I dive right in.

Cheer up everyone, exceedingly wealthy people really are intending to build an arena for basketball and hockey. It's not just us fans anymore.

To the neigh sayers (that's you, Geoff Baker), it may not be the Sacramento Kings and Phoenix Coyotes that come to Seattle, but when they do, the teams will be owned by people that care a lot more about having a quality product than that decade of disappointment called the Mariners.

Nobody really knows what will happen, admit it, recognize it. As often as Brian Robinson says, "Don't ride the roller coaster", and we keep telling each other to take every rumor with a grain of salt, we can't always stop ourselves.

WHAT COULD SONICS RISING DO TO MODERATE EXTREME REACTIONS TO RUMORS?

We're all suckers for what might be. It plays on our hopes to maximize a want.

The first item is a sphere reminiscent of a basketball.

The website says, "Feel the energy of the 250 million year old mineral salt as you enjoy a gentle massage with our crystal energy ball. Can also be used as a salt scrub in the shower - just rub the ball on a wet wash cloth and gently rub your skin with the cloth to exfoliate."

All you have to do is take this ball of salt and print (or etch) a message that retains ones sanity. 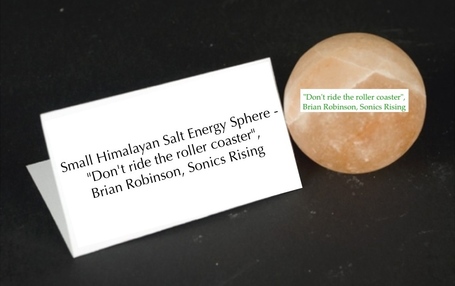 What about the hockey fans flocking to Sonics Rising?

The website says, "These round "Model 1" Himalayan Salt Massage Stones are approximately 1 in. thick, and between 2 and 2.5 inches diameter. They are perfect for hot stone massage therapy. Comes one per package, so order in multiples if you desire more than one stone."

Just think, you could be commenting on an article at Sonics Rising while getting a hot stone massage, with sail stones that say, "Don't Ride the Roller Coaster." 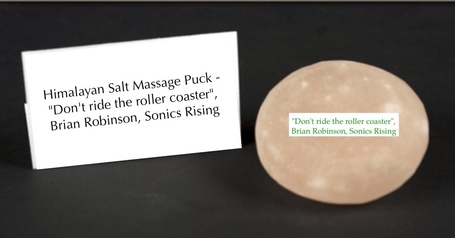 There you are, short of anything actually happening, the impractical solutions to dwelling on rumors are crystal energy and hot stone massage.