It's been a long seven years hasn't it?

Seven years since Clay Bennett swooped in and bought the Sonics. Five years since he whisked them off to Oklahoma City. Two years since we learned Chris Hansen's name. Nine months since he tried to buy the Kings. Three months since the deal fell through. Then came the brief flirtation with the Phoenix Coyotes.

In dealing with every twist and turn, every news story, every rumor, and every rumor of a rumor that has come our way, one journalist has stood above the others. No reporter has covered this story more thoroughly, more persistently, more accurately, or more ethically than him.

He is a local product who was born and raised in University Place, attended Washington State University, and has spent most of his life in the Evergreen State.

His name is Chris Daniels and he was kind enough to take time out of his busy schedule for an interview with me. I wanted to find out what makes him tick as a journalist, why the Sonics/arena story is so important to him, and how he feels about being held in such high regard by Sonics fans every where.

Here is part one of a two part series. 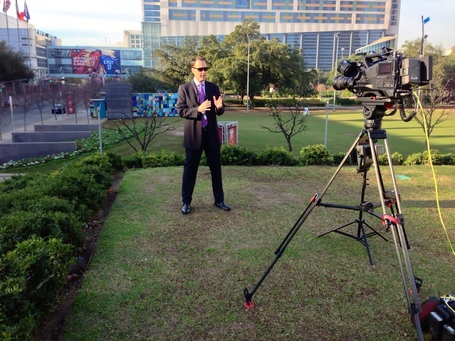 In addition to being Emmy and Murrow Award winning reporter, his bio at King5.com notes that he was recognized by Michigan's Associated Press as "Reporter of the Year" in 1999 and that he won USA Equestrian's "The Award for Broadcast Media Excellence" in 2002.

There aren't many reporters of his quality these days and I was curious about how he got into the business, what journalistic standards he holds dear, and how he goes about doing his job.

He flirted with sports reporting in his earlier years and describes himself as a "sports nut" on his Twitter page. So how did he go from being a sports guy to a hard hitting newshound? Like Noah of the Bible, his life was changed by a flood. Daniels put it as follows.

While in college at Washington State, I covered a flood for the student cable station and stayed up all night. A News Director in tiny Idaho Falls, Idaho saw my work and hired me based on that coverage.

I found that there was much more to talk about in the news world and I feed off the passion people show me in telling their story. I've criss-crossed the country in pursuit of those stories. I also come from a family of teachers, and in a way, our business is an extension of that.

My kingdom for a copy of that footage. Can't you just picture a young, unpolished Chris Daniels with bags under his eyes as he talks to emergency personnel and doles out the public service information on low definition TV?

In an article you can read by clicking here, Pbs.org lays out ten principles of journalism: serving the public interest, truth and accuracy, verification, fairness, distinguishing fact and comment, accountability, independence, transparency, restraint, and originality.

I believe Daniels adheres to all of these standards as much as humanly possible, but which one does he take the most pride in? He answers that in the following statement.

I'm most proud when people tell me I'm fair. It doesn't matter if it's in print or on television. I want to be fair and I want to be right.

With the Sonics and Sacramento story in particular, there was a lot of passion from fans in both cities. I got a lot of feedback from people who, depending on their prism and geographical location, wanted the story told a certain way.

I just keep telling myself be accurate, be fair, and include every opinion. I think I did that, and continue to do that. I have heard it from people in Sacramento, Seattle, and across the country.

Accuracy is also very important to him, sometimes at the expense of being the first person to break a story.

I've held onto information. It's better to get it right than get it wrong. I've had lots of people tell me, as far as the Sonics and Arena story, "I didn't believe it until you reported it." I think about that all the time. It takes years to build up credibility, and only a second to lose it.

We here at Sonics Rising try to give you good information, but most of the time we are relaying reports from people like Chris Daniels and offering comment on them. We, or more accurately I, don't spend a lot of time cultivating good sources the way a professional like Daniels does.

So how does he do it? How does he find these people and how does he get good and pertinent information to report on? In his words...

Let's just say, I've spent a lot of time following the ball behind the scenes, and developing relationships along the way. There is a bit of ‘information brokering' that comes along with it. I would like to think I've built up trust with the people I cover. It comes back to being fair, and honest with people, and with viewers/readers.

I've also had the back of my news director, Mark Ginther, who has allowed me time to research and spend time working behind the scenes, meeting with people, etc. He's passionate about the story too. That isn't always the case in our business.

So how does he pick and choose good information and maintain good relationships with the sources of it?

I've been pitched angles to this saga before that I just have not felt comfortable in reporting. I've also held on to information until it's appropriately vetted, or perhaps, I can get at it in a way that doesn't burn a source.

For instance, I look at land records. When someone says "We have all the land to build an arena", whether it is in Seattle, or Sacramento, it's not hard to check. That's what I did in Seattle, and I think I was first to report almost every transaction.

I did it in Sacramento, and reported months ago it had not all been locked up. I'm not a lawyer, nor do I pretend to be, but when the whole "right of first refusal" question came up, I asked around. I cited the legal analysts for their opinion, not mine. I asked people at the NBA, who dismissed it. It never became an issue. It is fundamental reporting.

In case you haven't noticed, social media has made a major impact on the reporting of the news, not just with our story, but with stories all over the world. The change has been both good and bad for various reasons.

It is a game changer. No doubt. As a news person, you better be on Twitter, and active, or go back to being a 2007-era dinosaur.

People in Sacramento don't really know who I am if Twitter wasn't around. Many people in Seattle learned of my/our coverage through Twitter.

It gave me a chance to ‘plant the flag', build our brand, and get the information out.

It puts more pressure on you to deliver the news factually and accurately before others and I've seen many people get tripped up by that.

There were certain stories that I wouldn't tweet if I didn't have multiple rock solid sources and documentation. I also have a higher standard for when to tweet a piece of information. I've noticed, especially on this story, the habit certain people have had to throw stuff up against a wall and see if it sticks.

When I last checked his Twitter page, Daniels had amassed 17,666 followers. A large percentage of those are as a result of the Sonics/arena story. In addition to the Seattle people on that list, many are from Sacramento and Phoenix. For him, it has been surreal.

It's changed the type of information I tweet. I caught on to that early on in the Arena and Sonics/Kings saga. A large part of my follows don't care about a fire in Enumclaw or ten car pileup in Everett.

There were people following me from all over the country during the peak of the saga, but I get it. I also get that, despite what people may say, they care about this story.

I had a woman from Mount Vernon stop me on vacation in Maui to tell me how much she loved my work. I had a farmer from Duvall tell me they only follow users tweeting about agricultural issues and me for the arena coverage. I had a young man come up to me at the Lenny Wilkins foundation dinner, and tell me he knew Barkley and Magic were there, but he was most interested in meeting me because of my work on Twitter.

Those are the kind of moments that stick out in my head, and realize I'm reporting something that is important for people.