Sonic Busts: The Free Agents and Draft Picks That, Well ...

In keeping with SBN’s weekly theme of “Most Hyped Free Agent or Draft Pick That Didn’t Work Out,” as a Sonic fan we all know we’ve had our share of busted hopes. Join us as we revisit those lackluster signings of yesteryear ...

Share All sharing options for: Sonic Busts: The Free Agents and Draft Picks That, Well ... 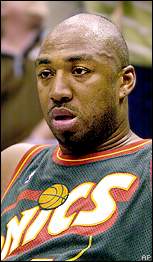 In keeping with SBN's theme this week of "Most Hyped Free Agent or Draft Pick That Didn't Work Out," as a Sonic fan (and heck, a fan of a Seattle sports team) we've all had our share of busted hopes. There may not be the Sonic equivalent of a spectacular bust like Rick Mirer or JaMarcus Russell, but there's certainly enough over franchise history to revisit. When life gives you lemons ... these guys were lemon juice in the papercut.

It would be easy pickin’s to include the 21 feet of largely useless centers trotted out during the mid 2000s (Robert Swift, Mohamed Sene, and Johan Petro) and of course, looming over the franchise like Barad-Dur looms over the landscape of Mordor is the specter of Vin Baker, but that almost deserves its own post as it’s the moment we can point back to as being the tipping point that resulted in the franchise’s ultimate exodus from the Emerald City. However before we get there, here’s a couple of other signings that come to mind:

Olden Polynice – the 8th overall pick, traded on Draft Day 1987 in exchange for Scottie Pippen and a 1st round draft pick that later became BJ Armstrong. Really, what else can you say but … ouch? Instead of acquiring the best defensive swingman of his generation, Seattle got … the guy from Enemy Mine who is probably most remembered now for his police offer impersonations, and I'm not talking this guy.

Vladimir Radmanovic – My long time colleagues back on the ESPN board days likely remember my bitching about Radman all too well. I –HATED—HATED! this draft pick. At the time Tony Parker, Sam Dalembert and Zach Randolph were still on the board, yet the Sonic front office instead chose to go with a non-defense-playing small forward to add to their already-stocked roster of non-defense-playing small forwards. Perhaps they thought that, like the 2013 Mariners, defense didn’t really matter as long as you had a roster of one-dimensional 6’10 guys that shot 3's. How did we miss not adding Matt Bullard?

Horace Grant - The Goggler himself. A guy who was acquired for his veteran leadership and to be a 3rd wheel in the offense [and probably to clear some cap to ...gulp....re-sign Vin Baker]. Seattle gave up four players to Orlando to acquire him, most notably Corey Maggette.

The poor guy got played 40+ minutes a night out of position as a starting center, and then got injured in a locker room incident, trying to break up a brawl between GP and Vernon Maxwell. He was then traded along with about half in the league the following year in a deal which netted the Sonics Patrick Ewing. Hindsight being 20/20, if they had just let Vin walk and kept Ho, what could have been ... perhaps we wouldn't have had to suffer through the one year of trying to watch Patrick Ewing hobble up and down the floor on his gimpy knees.

Which brings us to ... Vin Baker. Now at the time, when Shawn Kemp was swapped for him in a 3-team deal this was a great trade on paper. Honestly! Considering Kemp had submarined his own trade value and that the locker room atmosphere had been irrevocably damaged by leaks to the press about Kemp's off-court behavior ... getting a four time All-Star and 20/10 guy in return seemed too good to be true. And in retrospect, it was. Oh was it ever.

After a shaky second outing as a Sonic, the team re-signed Vin Baker to what was at the time a max contract, 7 years and over $70 million if memory serves. Baker responded by ballooning to over 300 pounds and posting steadily-decreasing numbers over the remainder of his career as a Sonic and elsewhere. At the time it was not known that Vin had severe problems with alcohol, but it didn't matter. Baker was untradable, and since NBA contracts were fully guaranteed he became an albatross wrapped around the franchise's neck. The team couldn't trade him or cut him, and his enormous salary prevented the front office from being able to add meaningful upgrades to keep the team truly in contention throughout the remainder of the Gary Payton era. Both the team's competitiveness and attendance dwindled, giving rise to a dangerous combination of apathy and a ticking time bomb in the form of a short-term Key Arena lease ... you know the rest. Who are your picks for the Sonics' biggest draft or free agent busts? Tell us below!