Silver: "We'd Love to See a Team Back in Seattle"

'Under the right circumstances', Silver wants a team back in Seattle.

Share All sharing options for: Silver: "We'd Love to See a Team Back in Seattle"

Speaking at a press conference in London, incoming NBA Commissioner Adam Silver reiterated that the NBA would like to return to Seattle some day. Check out the following Chris Daniels' tweet.

The key phrase in this statement is, of course, "under the right circumstances". There's no time line or guarantee with that statement, but at least he didn't say "I just don't see that happening in the foreseeable future."

Of course, David Stern had to chime in.

Meanwhile, Mark Cuban raised the issue in an ESPN article, which you can read here. He was interviewed about his thoughts on the upcoming transition. Here is a passage.

The Career of Rashard Lewis

In his 15th season and at 34 years of age, Rashard Lewis has been on many teams and gone through many role changes. Most of those he has adapted to and excelled at, even now with the Miami Heat.

The Career of Rashard Lewis

One interesting thing from that quote is about the TV deal. This seems to imply that it WON'T be done before David Stern leaves, as some pundits suggested a week or so ago. Just the fact that an owner is asking about expansion is a good sign for us, in my opinion.

What's really great is that this was Little Napoleon's last press conference as commissioner. Let me say that again. This is Stern's LAST PRESS CONFERENCE as NBA commissioner. 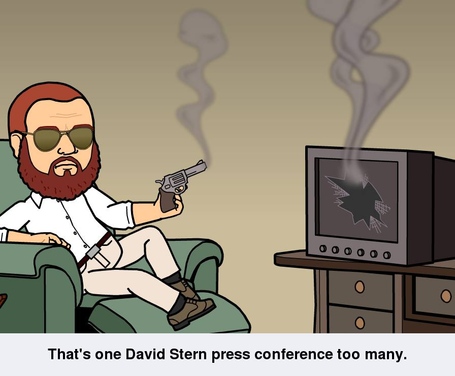 Here is a link to video with Silver's comments. It's quick, but he was smiling.