Xavier McDaniel, Dale Ellis, and Tom Chambers led the team to a deep run in the playoffs that no one expected.

Share All sharing options for: Greatest of All-Time: 1987 Seattle Supersonics

I was never a comic book person when I was growing up. If you don't believe me, chew on this statement: I was a big fan of the X-Man long before I knew who the X-Men were.

Indeed, Xavier McDaniel looked like he jumped off of the pages of a super hero magazine and onto the hardwood of Seattle Coliseum (KeyArena). He was fittingly just as bald as his namesake in the wheelchair at the School for Gifted Youngsters. 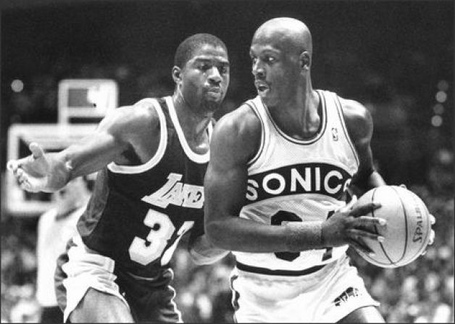 He was also part of a three-headed scoring monster that included Dale Ellis and Tom Chambers. All three averaged over 23 points per game during the 1986-87 season.

These Seattle Supersonics were not remotely the best team in the history of the franchise, but they were one of the most memorable for me -- partially because they played during my senior year in high school and partially because they advanced all the way to the Western Conference Finals in spite of a losing record.

With a rookie point guard named Nate McMillan, the team finished 39-43 in the regular season, but it became something magical, starting with the All-Star game. Seattle hosted the gala in its old digs at the Kingdome and Chambers earned the MVP award with 34 points in front of his raucous home crowd of 34,275.

Then came the playoff run that no one expected.

The Dallas Mavericks were the first victim. The Supes beat them 3-1 in a best-of-five series. This came as sweet retribution for Ellis, who was in his first year with the team after being traded from Dallas.

The Mavs used him so sparingly that he barely made a statistical dent, but Sonics head coach Bernie Bickerstaff knew something that they didn't. He gave Ellis a starring role and Ellis rewarded him with 24.9 points per game, earning the NBA's Most Improved Player Award in the process.

The next playoff giant to slay was led by ... well ... a giant named Hakeem Olajuwon. The Sonics beat the Houston Rockets 4-2 and won the deciding game on their home court. It was a grueling game that the Dream dominated with 49 points, but that Seattle took control of in overtime. Check out the awesomeness of this video clip:

Up next was the conference finals against Seattle's nemesis, the Los Angeles Lakers. The Sonics were a hot team. Destiny was on their side. There was no way they weren't going to pull the upset against Magic and Kareem. Right? Right? Right?

Wrong. The Lakers swept the series and the ride came to an end, but what a ride it was.


STATS
What do you think? Vote in our poll below and let us know where you think the 1987 team ranks in the top 22 Sonics teams of all time.