How to Value NBA Role Players: An Amateur's Equation

The Superstars get paid; but what about the middlemen?

Share All sharing options for: How to Value NBA Role Players: An Amateur's Equation

The NBA is a star-driven league where the biggest players receive a disproportionate amount of the praise and blame for their teams’ successes and failures. Looking at the history of the league it is easy to see why stars get so much credit; only the Detroit Pistons have won championships in the last 30 years without any players who had won a league MVP. MVPs aren’t the only players who win championships, though, and it is wise not to overlook the contributions of role players. There is a reason Robert Horry has 7 rings, more than Larry Bird, Michael Jordan and everyone else who didn’t play on those dominant 60s Celtics teams. He may not have ever appeared in an All-Star Game, but he contributed when it mattered, and savvy GMs recognized how much value he brought to a team without taking up an inordinate amount of salary cap space.

In order to further understand the value that GMs place on role players, I created a linear regression model to assess the market value of a role player in the league. To do so I would need to more formally define what a role player is and determine what statistics would be useful for measuring performance. The model I created isn’t perfect by any means, and I’ll address some of the ways it comes up short, but there is still plenty of useful information to be discerned from it.

The group of players I defined as role players have all been in the league past their rookie contracts and earn more than the veteran’s minimum. While many players become role players after signing veteran’s minimum contracts, this is generally due to injury or trade circumstances rather than as an intentional outcome from a team’s front office. For example, Kenyon Martin’s large contributions late last season were more due to the injuries to the Knicks’ starters Amare Stoudemire and Tyson Chandler rather than a genius plan by the Knicks coaching staff to unleash the 35-year-old Martin on an unsuspecting NBA. As such, there is a huge variance of performance statistics for players playing under these identical contracts making the data unusable.

This set of role players used has played between an average of 15 and 30 minutes for their teams in the 4 years previous to signing their most recent contract. To get the best understanding of what a current player can expect given market circumstances, all of these players have signed their current contracts following the 2011 NBA lockout, an event during which the NBA and its players agreed that the salaries of players should be reduced from 57% of Basketball Related Income to 51.2%.

The statistics being investigated are a sum of per-game averages and efficiency percentages compiled from the 4 seasons previous to a player signing their current contract. All of the statistics come from Basketball-Reference.com. Initially I used 9 statistics, in addition to a constant value, to create my linear model. The statistics used are player height above 6ft measured in inches, blocks per game, rebounds per game, points per game, 3-point shots attempted per game, steals per game, turnover percentage, usage rate, and efficient field goal percentage .

This model was decently accurate, producing an adjusted R squared of 0.684761, which is a measure of how much variability is explained by the model that scales from 0 to 1. Many of the variables had large t-statistics and seemed unnecessary. A Wald test was undergone to determine if any of the variables that had a probability of being zero higher than 5% were relevant to the model with a 5% significance level; in other words, "Can I get rid of the irrelevant variables?" This Wald test revealed that steals per game, turnover percentage, usage rate and efficient field goal percentage could be omitted.

The condensed equation for Salary based on a constant player height above 6ft measured in inches, blocks per game, total rebounds per game, points per game, and 3-point shots attempted per game was found to be a better measure. 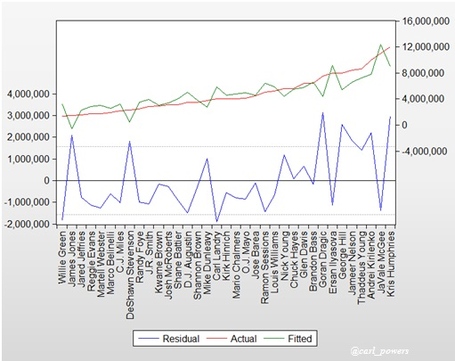 There were many encouraging aspects of this model, especially when compared to the initial model. The adjusted R squared has improved to .701727, meaning that less of the error is unexplained in this model. Additionally, the constant value was reduced by almost half, from 2,074,775 to 1,380,438. While it was not the intention of the model, this constant value of 1,380,438 is very encouraging as it is within 2.05% of the veteran's minimum contract for 2012-13 of $1,352,181. This means that if a team signed a player with no expectations of production, as is often the case for veteran's minimum contracts, they would be paying a number similar to what this model would predict.

At first investigation there are a few things that seem confusing about this model. First, there is a negative coefficient for height above 6ft, which seems counterintuitive when discussing basketball, as it would be easier for a person who is closer to the hoop to score, rebound and block shots. This model deals with basketball statistics which have a great deal of collinearity problems as the athletic, intellectual and physical attributes that allow a player to score more points also are likely to help that player rebound and block shots well.

The negative coefficients for height and 3-point attempts are explained when collinearity is taken into account. If you are comparing two players who score, rebound and block shots at equal levels, but one player is 7 feet tall and the other is 6 feet tall, then it is likely that the player who is 6 feet tall has an athletic or intellectual advantage that allows him to play at an equal level to that of the significantly larger player. As such this athletic or intellectual advantage will be rewarded with a larger contract for the smaller player. Similarly, the 3-point attempt statistic is skewed by the points per game statistic, and if two players score the same amount of points, the more efficient player will be rewarded.

I initially made this model to determine whether J.R. Smith should opt out of his contract at the end of last year. J.R. was difficult to measure as he had spent the majority of the lockout-shortened 2011 season in China, where the statistics aren’t very useful for measuring production. Based just on his stats from 2012-2013, my model predicted that he deserved a raise from his $3 million contract to one in the $4.6 million range. This offseason he received a much more substantial raise to $5.6 million over two seasons.

My model is simply OK when looking at its accuracy, but that is in large part due to the many immeasurable things that go into contract negotiations. Shooting guard is a scarce position in the NBA so he most likely got a boost as one of the few available players at his position. Maybe J.R. Smith has a really good agent or maybe the Knicks front office, prone to overpay in the past, splashed their big time New York City cash. Maybe J.R. Smith has compromising pictures of James Dolan, which would explain the whole Chris Smith fiasco from this season.

Even a simple estimate of what a free agent role player can expect from the free market can be useful for teams and agents, giving you an idea of how much cap space you may need to dump to make room for a guy. For example, if you are dying to have Andrea Bargnani on your team next season, you should have around $5.2 million dollars of cap space in addition to a very patient fan base. The model can also help you figure out if your front office has a history of overpaying players or if agents do a good job of maximizing their player contracts.

Thanks for sticking with my first piece all the way to the end! (For those who skipped to here, nice try, but you can’t fool me.) I'm new here at Sonics Rising and I am excited to investigate the business of the league and hopefully how it relates to the triumphant return of the Sonics. I will be doing more pieces like this, maybe a little less mathy, but I can’t guarantee that. I’m just a guy who is interested in the economics of the NBA, and I hope that I can find some like-minded folks out there as well. Let me know what you want to hear about and I’ll do my best to facilitate that.