Tax in the City

If you buy something from an SB Nation link, Vox Media may earn a commission. See our ethics statement.

Share All sharing options for: Tax in the City

Before we begin, I would first like to apologize to any accountants who are reading this blog in hopes of finding a brief escape from the drudge of tax season. I know you've been working for 16 hours straight, it’s only going to get worse as April draws near, and the last thing you want is more tax stuff to read over. Maybe go for a walk or do some yoga?

For the rest of you guys this is probably the only time of year, apart from election season maybe, where you are thinking about taxes. Unless you are an NBA referee you have been looking through your records and preparing to file your taxes just like everybody else, including NBA players. NBA players end up paying a pretty significant share of their income in taxes as most players are in the highest income bracket for federal income tax. However, the total amount they pay will differ significantly depending on which team they play for as all income is subject to the taxes of which ever state and city it is earned in.

The NBA Salary Cap is the same throughout the league for each team and set at $58.679 million, but when contracts are taken into account, the before tax figure is measured. This means that all of the teams have the same before tax cap but, after taxes are considered, some teams are able to offer more money to their players than others. This is especially advantageous for teams based in Texas and Florida as they have no state income tax. Tennessee also has no state income tax but they have a unique "Jock Tax" that applies to both Grizzlies players as well as visiting teams.

A few other states lack income tax but none of them really matter except one: our state. Washington has no state income tax, something that would provide an advantage to an expansion team looking to recruit players or provide an incentive to move a team out of a tax heavy state like Wisconsin.

Here is a list of the state and local tax rates for all of the American franchises with Seattle thrown in for fun. I have omitted Toronto from this graph as they do not have the same level of Federal income taxes because of that whole Canada thing they’ve got going on. Sorry Raptors guys, if you want to compare your province to California check out this piece from Matt Blumenfeld. 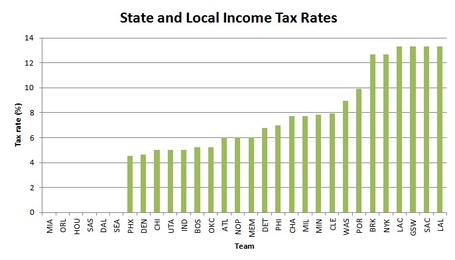 The difference in tax rates can be huge for NBA players as 10% of a player’s paycheck can exceed well over a million dollars a season if they are getting a max contract. These numbers make Dwight Howard's move to Houston very reasonable as he is getting to take home a much larger portion of his paychecks than he could as a Laker. Forbes calculated the increase in his take home salary at $7 million over 4 years by choosing Texas over California. That’s almost 500,000 lbs of gummy bears for the noted candy lover.

It’s important to remember a few things when looking at this graph. First, since half of players' games are on the road and every team plays in every location at least once, not all of a player’s income is taxable at the rate of the state they are located in. Practice days, training camp, meetings and home games are all taxed at the home state rate but away games and some travel days are taxed by the state where the games occur at their rates. This number has been estimated to be anywhere from 15-30% of a players earnings and it applies to every player. It also can be tricky as there calculating which days count towards the home state’s taxable income differs from state to state. Those who come from California, among other states, are subject to taxes on the away income that at times can exceed the rate of the state where the game is played as explained in the above Forbes article.

States that do not have income tax find other ways to earn tax revenue like sales tax and property tax. While many players do not permanently reside in the state they play in, the effects of these additional taxes will be reflected in their rental rates for apartments and in their consumption. While it’s possible for all the players to load up at Costco when they play Portland to avoid sales tax, it seems unlikely and potentially against the law.

Because local taxes extend beyond income taxes, another measurement to consider is Tax Burden, which is defined as follows:

State-local tax burdens measure the percentage of income that taxpayers in each state pay in state and local taxes. Every tax that is collected on both the state and local level is included in the calculation: income taxes on individuals and businesses; general sales taxes; product specific taxes such as those levied on gas, cigarettes and alcohol; property taxes on individuals and business; and a multitude of other taxes.

Here I have listed all of the American NBA teams by tax burden once again including Seattle. Keep in mind that the average American Tax Burden is 9.9% 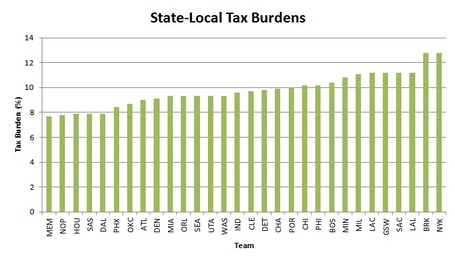 We find that Memphis has the lowest tax burden, but we must not forget that they have a tax unique for NBA and NHL players that wouldn't be represented significantly in this figure.

While the sample size is very small, the season is only half done, and there are a million other factors in play, it is easier to find a successful team near the bottom of the list than the top. Eight of the bottom 10 teams in terms of tax burden made the playoffs last year including 3 of the 4 conference finalists. 5 of the top 10 teams were in the playoffs last season where they won a combined 4 games after the first round.

Of course it is easy to notice that Utah, Washington and Indiana are all right next to each other and looking at those teams together it is very hard to find any similarities. Having a high tax burden won’t doom your team to the lottery but I believe that there is an advantage to having a lower tax burden. Savvy teams like those in Texas are able to take advantage of it.

There are some additional things to consider when looking at tax burden. NBA players are not average earners, as a good number of them make more money in a year than I will probably ever earn. If a state has disproportionately higher taxes on higher earners the player will have a higher tax burden than is represented on this chart.

But it is important to consider that an NBA team has many, many more employees than basketball players. Having a franchise located in a region with a low tax burden could prove useful for recruiting scouts, assistants and training staff at a lower cost. How much of an advantage it brings is uncertain. Mitchell Engler argues in this piece in favor of adjusting the salary cap to recognize the tax differences and he has a strong case. While I see his point, I do not necessarily agree as I feel the league will never truly be fair as there are so many factors that give teams advantages and disadvantages. While I think it is a clear disadvantage that Cleveland has to recruit players to play for a team run by Dan Gilbert with his angry comic sans rants, I don’t think they should have a larger cap.

Seattle finds itself in a favorable position in both of the graphs with no state income tax and a tax burden of 9.3%. The team would have an advantage over half the league when keeping free agents and recruiting others as a player can keep more money as a Sonic than, say, as a Blazer. In a league as competitive as this, every advantage counts for something. Introducing a team through expansion with no income tax, like the Sonics, should be supported by the players union as many players get to play at least one more game in an income tax free city.

While I hope for expansion rather than relocation, I’ll also indulge the folks who are looking to steal the Bucks. Notice that Wisconsin has particularly high tax rates and a high tax burden. A lot of the Bucks lack of success is management related and we have to consider how the team would improve if they were able to offer free agents a tax break rather than an increased tax burden. Seattle might be a better home than Milwaukee for an NBA franchise from a player salary stand point.