Could the NHL first scenario be less risky for the City of Seattle?

The data shows that an NHL first scenario poses less risk to the City than the NBA.

Share All sharing options for: Could the NHL first scenario be less risky for the City of Seattle?

Let me first call out that this is not an "NHL is better than NBA" post.  I am a data guy-I love it, I breath it & I speak it. In any disagreements or discussions I usually try to find some data to understand the situation just a little bit better. So when people discuss changing the MOU, I naturally went looking for some data to understand the risk to the great City of Seattle to build with an NHL team first. There are a many other metrics NBA fans can point to that show why the NBA is a better positioned sport, so do not take this post as an attack on the NBA.

The MOU is an agreement with the City of Seattle, King County and ArenaCo. ArenaCo will be the entity paying Rent for the facility and the Tax Revenues generated at the Arena. Assuming the rent stays the same, the risk of changing the MOU to lead with the NHL should be the delta between NBA and NHL expected attendance (the Tax Revenue driver). In order to identify that risk, I looked into the NHL & NBA numbers. According to ESPN reported attendance numbers, the NHL now exceeds the NBA: 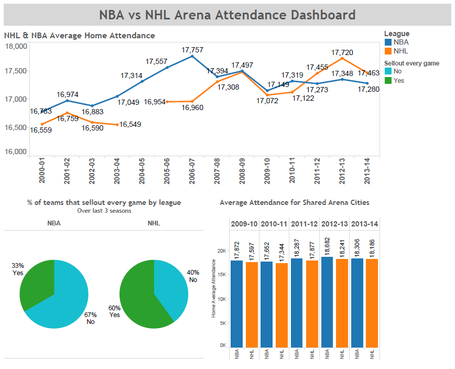 Additionally, taxes will be generated by ticket prices. According to TeamMarketingReport.com, the average NHL ticket prices are 17% higher than the NBA's average ticket prices thus generating 17% more in taxes.

Finally, according to a Nielsen Sports media report, 33% of NHL fans average income over $100K.  Compare that to the NBA where only 18% of fans have an income over $100K. The impact in Seattle would be more disposable income to spend at games which will generate more tax revenues at the arena.

With all that said, I still believe the inevitable return of the Supersonics will be much more popular than the Seattle NHL team. However, since the city is using league averages for their model,  an NHL first scenario poses less risk to the City.

After studying stadium funding economics well before the story of Hansen bringing the Sonics back was revealed, I believe the City and County have been very responsible in the creation of the SoDoArena MOU. I have been very proud of my city officials and think they have done a great job. I am confident in the leadership of this city and expect them to do the right thing in how they handle the MOU.