Chris Hansen Out; Paul Rogers In

My super secret surprise is now blown and I'm ticked off.

Share All sharing options for: Chris Hansen Out; Paul Rogers In

One thing I've been taught over the years is that being privy to juicy information is not reason enough to share it with the world. Nothing removes you from the information flow quicker than to betray a confidence in a very public way. Chris Daniels would never do that, but Christopher King did today.

I was very disappointed to see the following Tweet.

Chris Hansen is out and I just met the guy behind the group stepping in. Look forward to learning more in coming months. #nba #sonics

I am very upset that, thanks to Christopher, my secret has been revealed. I'm shoving Chris Hansen out the door like he's a distant relative begging for money. I am buying an expansion franchise and Adam Silver is firmly on board. I've also been working hard behind the scenes to rally support from the city and county councils.

I just hope that Christopher's premature leak of the story doesn't put the entire project in peril. Silver will likely have to publicly deny it now and that will only fuel the anti-NBA fire that has been burning recently in Seattle.

You might be wondering how a small-church pastor could afford to pull this off. Let's just say my congregation is very financially supportive. They are a tithe paying machine. If you don't believe me, check out my savings account summary. 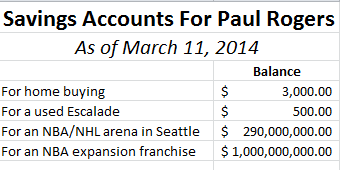 So, as you can plainly see, I can and will get this done.

Another thing that disappoints me about today's revelation, however, is I'm really going to irritate the founder of Sonics Rising. Check out this tweet.

@VisibleKing @sonicsrising Hansen is not dropping out. He controls the site & has strongest ownership group.

I'm sorry you had to hear about it like this, Brian Robinson. It really is happening. I'm forcing Hansen out. He's probably been too scared and ashamed to tell you.

Sorry, everyone. This information was not ready for public consumption.