Why NBA Attendance Numbers Are Dropping

Share All sharing options for: Why NBA Attendance Numbers Are Dropping

You don't need to look at the numbers--you can simply look at the games--to know that attendance in the NBA is dropping each and every year.

Is it a dwindling on-court product? In some markets, yes. Is it the evolution of HDTV? That's possible, sure. Is it inadequate facilities? The NBA would like you to think so, especially if you live in Sacramento, Milwaukee or Charlotte. In reality, it's that when those facilities are improved upon (or, in some cases, completely replaced), the focus continues to be on the luxury items: the box suites, the fine dining, the lifestyles of the rich and famous. For example, let's take Charlotte. The soon-to-be Hornets are requesting $42 million ($41.9 if you want to split hairs) from the city of Charlotte for improvements to the Time Warner Cable Arena. For the record, the Bobcats are currently 25th in attendance at 15,335, despite being on the verge of making the playoffs for the first time in four years.

Of that $42 million, the Charlotte Regional Visitors Authority has asked for $7.8 million to cover basic upgrades such as plumbing, lighting, carpeting, etc. in the eight-and-a-half year old arena (third newest in the league, mind you). The Bobcats have requested $34.1 million to cover restaurant upgrades, suite upgrades and moving the ticket booth for some reason. The team is requesting upgrades based on the fact that the NFL's Carolina Panthers recently got $87.5 million to renovate their stadium (Sound familiar?).

I find it hard to believe that a facility less than a decade old needs that much work done, though. If you remember, the big complaint about KeyArena is that it lacked "revenue streams" found in most newer arenas. This means restaurants, shopping and, of course, luxury suites. Question: how many of you have ever been in a luxury suite? I can tell you that I, myself, have not. This is an example of one of the luxury suites at New York's Madison Square Garden: 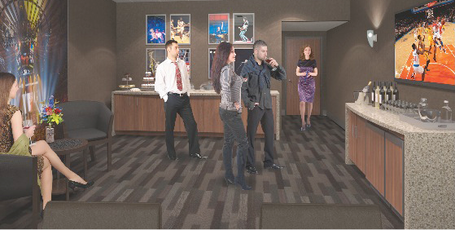 Notice anything? They're watching the game... ON TV! THEY ARE AT THE GAME AND THEY ARE WATCHING IT ON TV! These luxury suites are, most of the time, nothing more than places for business meetings and small parties or simply status symbols. The people in there drink and watch, ON TV, the game THEY ARE AT! Sorry... it just gets me all worked up because these are apparently the people the NBA feels they need to cater to. If they could, the NBA would fill the arena with these extravagant party rooms for the uber-wealthy to sit and not pay attention to the product on the court. Of course, these people need the finer things in life so a simple hot dog and beer will not do. No, they need lobster and shrimp rolls or organic Asian chicken (these are real menu options at MSG).

So while the NBA continues to upgrade their arenas to cater to these ultra-rich, what does that do for us? The average price of a non-luxury ticket to an NBA game is $50.99 (although that price drops to $43.54 if you remove the Knicks and Lakers, both of whom have average prices over $100). Last season, the Brooklyn Nets had 2,000 tickets per home game that were priced at $15. To get those tickets, however, you had to be quick to reply to a social network post. This season, those tickets no longer exist. At KeyArena back in the day (Oh man, I'm getting old.), a $7 ticket could be purchased at the box office. It's safe to say that those kinds of prices will not be available in the new arena. The owners seem to be of the mindset that less is more, as long as the less have more.

We continue to hear how so many teams in financial peril--and therefore the league--need to have 34 different "fashion jerseys" per team, or put the McDonald's logo on the Rockets uniforms (yeah... Why do you think they went back to red and yellow, hmm?). Well, perhaps if more people were coming to games, teams would be better off and wouldn't need to resort to these tactics that cheapen the overall product and therefore further distance the fans from the league. It is, indeed, a slippery slope.

Mr. Silver, I implore you to know your audience and have your teams find a way to make the best possible experience IN THE ARENA, for the people watching the game ON THE COURT. Maybe then the fans will come back and you can fill the arenas once more. We don't care about lobster rolls or Cristal or personal butlers or leather reclining seats. We care about basketball.