Potential hockey owner has purchased property in the SoDo neighborhood worth $281 million dollars.

As reported today by KING 5's Chris Daniels, at least one of the potential NHL owners, Victor Coleman, has made significant property investments in Seattle's SoDo neighborhood.

Property purchases, including the Merrill Place Building, are near the site where Chris Hansen has proposed to construct a modern indoor sports facility capable of hosting both NBA and NHL franchises as anchor tenants. 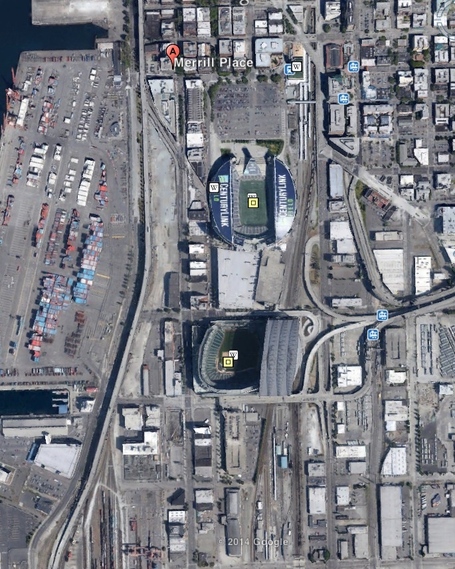 Prospective Seattle NHL owner Victor Coleman recently purchased buildings on two city blocks near the Stadium District for $281 million. Public records show "Hudson and First King LLC" bought the property at the intersection of 1st/King back in July of 2013 for $224 million. Another LLC, called "Hudson Merrill LLC," purchased the Merrill Place building, one block over, in February for $57.6 million. Both LLCs list the same address at Coleman’s Hudson Pacific Properties in Los Angeles. That company’s website says it owns the three properties that were part of the purchases. That would mean Coleman has already spent more on land in the SoDo area than investor Chris Hansen, who would like to build an NBA/NHL arena in the neighborhood. It also may be an indication of Coleman’s interest in the spot of town for a new sports complex. He also owns a building in Seattle’s South Lake Union neighborhood and in Lynnwood, as well as multiple buildings and movie studios in Northern and Southern California.

I would personally prefer to not speculate too much about a specific purchase of any buildings, including the Merrill Place building. The investments in property are not exclusive to Seattle, or the SoDo neighborhood. Still, they obviously anticipate profit and benefit from their purchases due to anticipated growth.

If they can more directly influence increasing the value of those properties by partnering with Chris Hansen's plan for an arena, win-win, and a big win for hockey fans.

If you choose to speculate and just believe that all of the news recently will inevitably lead to Seattle having an NHL team, that is understandable.

I wouldn't quite yet go knitting a Seattle Skyline Pullover sweater, with the word "hockey" tastefully lettered just above your heart, but that is up to you.