Close the Record Books: The Thunder Are Not The Sonics

The winners write the history books, right? So are those of us who lived it supposed to just forget?

Share All sharing options for: Close the Record Books: The Thunder Are Not The Sonics

Last night, the Oklahoma City Thunder lost to the San Antonio Spurs by a final score of 112-77. It was the worst loss in that franchise's six-year existence.

Read that second sentence again. That's how it is. The Thunder were established in 2008. Just ask them. 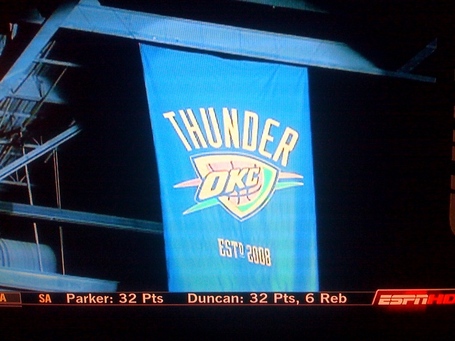 Yet SportsCenter tweeted this after the game last night:

They even differentiated the cities! This spawned a great number of replies from fans who wanted SportsCenter to acknowledge that OKC and Seattle are not the same. The replies came from fans from BOTH cities. As much as we, as Sonics fans, don't want the Thunder using our history, the Thunder fans equally don't want the team to do so. When the Thunder acquired Kendrick Perkins, he had to change his number because 43, the number he wore in Boston, was retired for Sonics great Jack Sikma. Thunder fans implored "Why should we honor their retired numbers?" Sonics fans replied with "I KNOW, RIGHT?!" Fans in OKC want the Thunder to be their own team, with their own history, and not have the ghost of the Sonics always hovering above their head.

The problem, of course, is that SportsCenter is "technically" correct. "Technically" the history of the franchise once known as the Seattle SuperSonics, along with all of its records, stats, retired numbers, etc., belongs to the Professional Basketball Club, LLC, the owners of the Oklahoma City Thunder.

That's the way it is in sports, or at least how it has been. On Tuesday, the Charlotte Bobcats were officially renamed the Charlotte Hornets. With the new (old) name, came all the history tied to it. The team was awarded all of the history, records, stats, retired numbers, etc., of the 1988-2002 Charlotte Hornets. The New Orleans Pelicans received all of the history of the New Orleans Hornets and New Orleans Pelicans (granted, the Jazz kind of mucks this up but that's a whole other discussion). This is how it should be. Hopefully this sets a precedent for the return of the Sonics' records once the team is restored. History belongs to the city in which it happened. It belongs to those who lived it. "History" should be synonymous with "memories."

This whole debate was first sparked with the Cleveland Browns. In 1996 the Browns moved out of Cleveland and became the Baltimore Ravens. As part of the city of Cleveland's agreement to let the team relocate, the entire history of the team would be left there. The Ravens would be treated as a brand new team. Three years later, the Browns were reborn, complete with 55 years of history in their pocket. Controversial as it might be, this is how it should be. The only defense for moving history with a team is "that's how it's always been done." Well, things change.

The NBA refers to its teams as "franchises," yet their definition of the term is rather loose. It's not the same as, say, a Subway franchise. If you purchased a Subway franchise and wanted to move it to another town and rebrand it as SubWorld, Subway would not let you. Do you know why? Because they don't want people confusing Subway with SubWorld. Yet we are allowed to continue to confuse the Oklahoma City Thunder with the Seattle SuperSonics.

As it stands, the Oklahoma City Thunder have claim to an NBA Championship won in 1979, 29 years before the team existed, in a city named Seattle by a team called the SuperSonics. There are no ties from one to the other, aside from some employees. By that standard, the Memphis Grizzlies have claim to the Miami Heat's title last year because they have Mike Miller now. You can't just purchase accomplishments that you didn't achieve. A billionaire in Georgia can't go and buy the Civil War history and reclaim it as a win for the South. Yet in sports, we're supposed to just accept it because "that's how it's always been done."

Every relocation should be treated as a contraction/expansion as far as the record books go. Everything from the previous team should be locked away, archived, only to return if the team does. This is all the more reason for the return of the Sonics. The history of that team belongs in Seattle, where it took place, where there are still people who remember it. I promise you, those people don't remember it taking place in Oklahoma City.