There has been a lot of talk of the Los Angeles Clippers and how their future relates to the Seattle SuperSonics lately, with some radio jockeys who shall rename nameless even going so far as to suggest that one Steve Ballmer could buy the former team just to indulge his appetite to own an NBA team. This is obviously a ridiculous talking point and nothing more. So how about we go with another talking point that will never happen, inspired by this tweet?

QUESTION OF THE DAY: How would the '96 Sonics match up against today's L.A. Clippers in a 7 game series? #NBA pic.twitter.com/4kUFJyj806

It's an excellent question and one that triggers serious debate.  This year's Clippers have often been compared to the Sonics of old.  Blake Griffin and Chris Paul have been called the modern day Kemp and Payton.  The team has been nicknamed "Lob City," a moniker that surely could have been applied to the Sonics in the mid-90s. 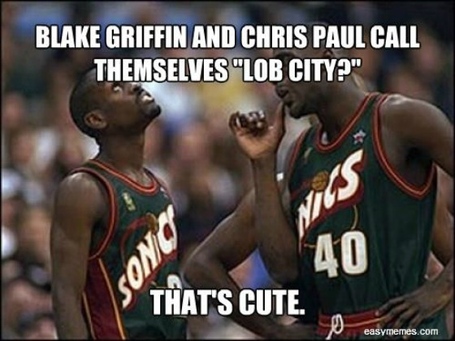 Here's how the teams stack up head-to-head.

So what do you guys think? Could The Glove stop CP3? Would Kemp and Griffin have a dunk-a-thon? Who hits more threes; Redick or Hawkins? Would Brickowski and Barnes kill each other? Let us know!