Hansen Doubles Down on SoDo Land

Investor and prospective Seattle SuperSonics owner Chris Hansen negotiates an option to purchase a large parcel of land in the SoDo neighborhood in a further commitment to his arena project.

Share All sharing options for: Hansen Doubles Down on SoDo Land

In a sign of further commitment to the SoDo arena project, investor Chris Hansen has an agreement in principle to complete the purchase of more land in the SoDo industrial neighborhood, as revealed by KING5-TV's Chris Daniels on Monday evening. This latest purchase is described as the largest of the land parcels Hansen has purchased in the area over the last few years.

He has so far spent almost $65 million, in cash, for several pieces of land near 1st Avenue South and Occidental. The piece of property, involved in this latest transaction, has an appraised value of around $10,500,000. Vipond says Hansen has already agreed to a final sale price for the new piece, although it will remain undisclosed. It will likely be for significantly more than the appraised value of the property, based on market conditions, and the fact that Hansen paid roughly $21 million in 2011 for his first piece of property, south of Safeco Field. At the time, it's appraised value was less than that.

The land is across Holgate Street from the proposed arena site and runs along Occidental Avenue South in parallel to the Krispy Kreme Doughnuts shop, Key Bank, and adjacent buildings along First. The parcel is said to encompass nearly, if not all, of the land between Holgate and Lander Streets, a roughly five-acre tract that would interestingly put Hansen development near the front doorstep of former Sonics owner Howard Schultz's Starbucks world headquarters campus. 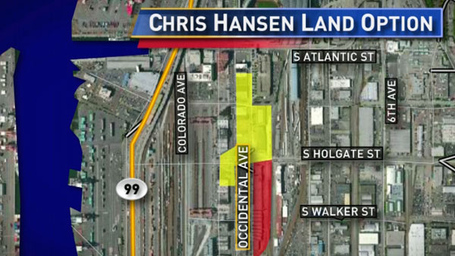 There has been talk -- and concern expressed by some citizens and members of local government -- that Hansen is intrigued by the concept of developing an entertainment experience around the new arena modeled after AEG's "L.A. Live" complex surrounding the Staples Center in Los Angeles. Purchases along First Avenue just north of the planned arena site are earmarked for such development, but on a smaller, more intimate scale that would fit the Pioneer Square aesthetic carried on by both CenturyLink and Safeco Fields. This new land purchase would seem to offer the possibility of further development along that vein.

Daniels points out, rather, that such a site could provide an ample solution that would go a long way towards mitigating parking concerns that have been raised about the addition of a new arena in the district. Last year, Hansen completed two purchases on the opposite side of First Avenue South, including the former PaperZone building that sits kitty-corner from the proposed arena location, both believed to be set aside for parking. This new land parcel, larger than the garages built for stadium neighbors Safeco and CenturyLink combined, could support such a structure with minimal disruption to the surrounding industrial interests.

While the city will still need to balance its industrial needs with traffic and parking issues in the area should they agree to partner in the arena project, this would seem to demonstrate that Hansen continues to push forward, even as prominent partner Steve Ballmer left the investor group to pursue ownership of the Los Angeles Clippers on his own. Furthermore, this could be in direct response to any mitigation concerns that have arisen during the environmental impact analysis, which is due to be completed in early September.

[Bill Vipond, Hansen's real estate consultant] added, "This is a commitment," shrugging off suggestions the project would be killed after Ballmer agreed to the deal for the Clippers. "This shows Chris is looking for ways to make this happen."

The agreement is for an exclusive option to purchase the land, an option which will expire on March 31, 2017, if not exercised. That fits within the timeframe of the effective period of the Memorandum of Understanding between Hansen, the City of Seattle, and King County to complete steps to enter into the partnership on the new arena.

What are your thoughts on this latest development and how it affects the arena effort?