Share All sharing options for: Becoming a Sonics Fan - What's your Story?

When and how did you become a Sonics Fan?  What is your story?  Care to share?  If you have a great story (or lengthy one) don't hesitate to write it up as a Fan Post where I can feature it if it makes the grade - just leave a comment with a link to the Fan Post so we call can check it out if you chose this route.  Otherwise, hop into the comments over the holiday and help us get to know your story a little bit better.

I was a 4th grader growing up in Sioux Falls, SD.  My parents sent me to my first basketball camp at the local YMCA.  After getting my shoes on and getting warmed up, the camp coaches divided us into teams, and then gave our teams NBA team names.  I was on the Sonics.  Who?!?  I had never heard of the Sonics.  Didn't know they - or Seattle - existed.  That spurred me to learn about this team and city, and from that grew a love for the Sonics. This was just a handful of years after the Sonics had won the NBA championship, so to my young eyes, they looked like as good a team as any to follow.  Well, them and the Magic led Lakers.  Hey, I was a kid, so give me some grace!

When I got to High School I thought I might find some others who were fans of the Sonics like me.  Wrong.  I was the only Sonics fan in my High School, though at least there there were others who followed the team and could talk intelligently about them.

Then in college, my fandom really went to the next level (Fall of 1993).  I was that guy who owned every Sonics hat and wore one every day.  This was before Al Gore invented the internet, so I had to search long and hard to find these hats.  Whenever I saw a new one, no matter the price, no matter how broke I was, I bought it, knowing I might not see another one for a long time.  On trips to Minneapolis I'd make college friends stop and let me check out new stores on the odd chance I could find some new Sonics gear to rock.

I continued to follow the Sonics from afar throughout college.  I was sitting in a relatives house in Loveland, Colorado when Dikembe Mutumbo sprawled on the court at the end of the game stabbing me in the heart and crushing the Sonics playoff dreams with an embarrassing loss to an 8 seed.  The loss was tough enough, but to be surrounded by Nuggets fans was painful.  For years. 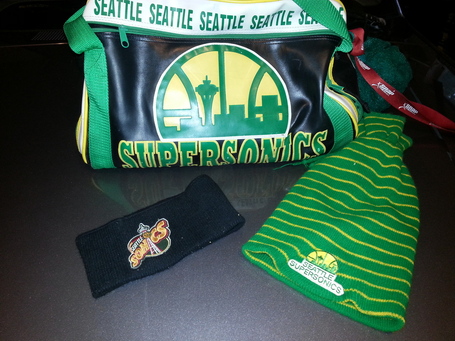 I have used a Sonics gym bag every day since 1999 - yes the same bag.  My brother gave it to me for Christmas that year.  While it is too small to hold all my stuff well, and it is borderline falling apart, I hold onto it, loyally using it anyhow.  If my house was burning down, after my family, wallet and computer I'd probably grab this bag.  Well, that and the fireproof safe is too heavy to readily carry even at my size.

I spent thousands of hours on SonicsCentral.com chasing down and eliminating spam from the comments.  Starting game threads.  Editing Brian's posts.  Tracking down the code for Popcorn Machine so I could enter the +/- after every game with the box score so we could have a better picture of how the game actually went.  I was that guy. I was thankful to have gotten in pretty early at SC.com, and was always grateful to be part of what was going on there.  I was and continue to be thankful for Brian Robinson giving me some run when he's never met me live and in person.

When the Sonics were stolen from Seattle, I quit the NBA.  It took a few years before I watched another NBA game.  Prior to this season, I've only watched the NBA with passing interest since the Sonics moved to be honest.  Some playoffs, a bit here and there, but no new merchandise, no game tickets, no concessions.  Kevin Nesgoda and a couple of other voices have swayed me to pay attention once again.

I don't drink coffee, so I couldn't effectively boycott Starbucks.  Though it does still kill me a little bit each time my wife visits one (it's her favorite coffee).

Perhaps the most painful thing in all of this for me is to watch OKC.  Because I love them.  I love what Sam Presti was doing as the team left Seattle.  Kevin Durant is nightly can't miss basketball.  They play hard, are tenacious, and incredibly talented as a team, even with the loss of the bearded one James Harden.  And I watch and think what if.  What if that was my team still.  I almost feel like I'm cheating on my old team when I watch them.  And I even have a bit of guilt because I want to cheer for them.  But that would mean cheering for Clay Bennett's team.  I can't do that.  That's where I draw the line.

So I, like many of you await their return.  Hanging on every scrap of information, every turn of the plot.  Some days it feels like a team is close enough I could taste it.  Others, it seems like a pipe dream.  But the more time I spend here with other passionate fans, the more it leads me to believe that this can happen, that we'll be getting a team.  Somehow, I don't know how.  Someday, I don't know when.  But I believe.