With my voice gone and my energy level drained my wife and I drove home after attending the NFC Championship game. It really hadn't hit me yet, our Seahawks were going to the Super Bowl! Naturally, when I got home I had to go online to see how realistic it was going to be to make the trip to NYC.

But what did I do first?

Check Hotel availability and costs? No.

The first thing I did was bring up the New York Knicks home schedule. They were playing the Heat, the night before the Super Bowl, at MSG. What a great game to go see. Melo vs. King James. Then I thought, wait a minute, how about the Nets and their new arena in Brooklyn? I checked their schedule and boom! My heart started to race when I saw:

Seeing a game at MSG is on my bucket list, but how could I pass up the opportunity to see and root against the Thunder dressed in all Sonics gear!

Fast forward to Thursday morning (1/30) and my wife and I are boarding a plane to Newark. We have our Super Bowl Tickets. But almost as important, we have our courtside tickets to the Nets game and this sign in tow! 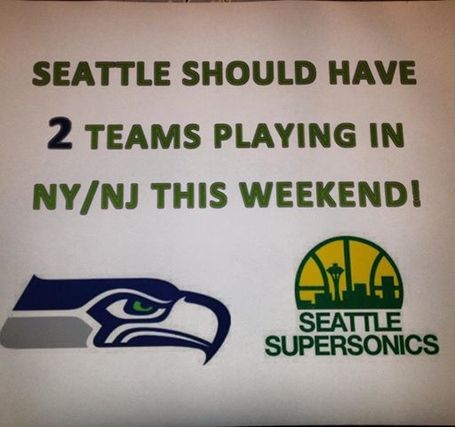 95% of the people on this plane are going to the big game and what an experience it was. SEA! HAWKS! chants began as the tires lifted off the runway. The flight attendant in the Russell Wilson jersey informed me they doubled up on alcohol for this flight and yet they were almost out of everything when they reached me on their FIRST drink service! Didn't help that the guy in front of me ordered 5 drinks!

Our flight only took 4.5 hours, maybe because this guy was sitting in first class! (Taima, the Osprey, that flies out before the team is introduced)

Friday (the day of the other big game)

After a full day of touring Super Bowl Blvd and the craziness that brought, we made a quick pit stop back at the hotel to get ready.

12th man Flag? Sure, why not Check

While on the subway, my excitement grew. I've never sat courtside. I've sat Diamond Club at Mariners games and this Calvin Klein Courtside Club sounded similar. All inclusive with the normal special VIP entrance and fancy buffet area for VIP's. Turns out, this makes Diamond Club seem like AAA. About as high end as you can get but, we are in NYC after all.

We find a table and take off our jackets and instantly we felt eyes focused on us. We were the only ones in there with Sonics gear on. Everyone was staring and looked confused. After a few minutes the initial responses were positive.

The trend that was developing though, and the problem I had was most thought we were cheering for OKC! Especially the few wearing OKC jersey's. I was shocked! I'm not sure how many times I had to say, "Would you cheer for the new version of a team that was stolen from you?"

One thing was very consistent, everyone we spoke with agreed that we deserve to have our Sonics back!

After I was done stuffing my face with food, my wife and I headed out to our seats. Once we found them, we had this picture taken in front of them.

I was able to get away with holding up my 12th man flag for almost the entire first half. I figured that was the best way to initially get the cameras to focus on us before switching to my other sign. Jason Reid, from Sonicsgate, got in touch with us while in New York and gave us some tips on getting attention. They were doing some work in NYC and almost found enough time to attend the game with us. They even shipped me a Sonics Flag, but it didn't arrive in time for the game.

I began to get texts from family members that knew exactly where we were sitting (courtside, row B, directly behind the hoop near the OKC bench) as they could barely see the 12th man flag. Problem was, the hoop was blocking most of the camera view and didn't once zoom in.

Half time had arrived and I found myself feeling a little bummed out. Probably because the Nets were getting blown out by the Blunder in addition to us not getting any TV coverage. Not to mention a guy in a black suit came over and made me put my 12th man flag away. The lone bright spot was that WE were not alone there. There were DOZENS of people in SuperSonics gear! Most of us found a way to meet up at halftime which was a lot of fun.

The third quarter began and my wife and I quickly dipped back into the Calvin Klein Club to grab food and a drink. We then headed back out to the floor, walked around the sideline to other baseline to get to our seats. Little did we know what was going on during our walk!

Luck would have it that my phone battery would die but all of a sudden my wife's phone started blowing up. Texts and messages were pouring in and below shows why.. 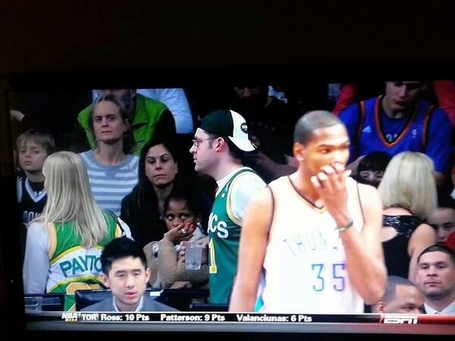 Mike Breen, who announces with Van Gundy, was talking and in mid sentence says, "There goes some Sonics fans" as we walk by the camera. At this point we are sitting in our seats not knowing the rant about happen courtesy of Jeff Van Gundy. Mike mentions a stat about I believe Ibaka going 12 for 12 from the field and brings up Payton's old record (14 for 14). At this point Van Gundy loses it and during his awesome rant the camera guys have nothing better to do but to find us at our seats and provide this nice footage of us.

With the game in hand, and Durant on the bench I find myself asking how do I get his attention?

Guys sitting in the rows right behind their bench begin to yell enough to get him to turn around. One guy in particular is pretty pissed off that Durant isn't playing the entire 4th quarter and thus is about to end his 30 point streak. (I think he was 10 for 12 and had 26 points)

As you might guess that guy is tossed from the arena and now Durant looks bored again. I focus my sign towards his direction and he looks over and reads it. As I see him reading it, I start pulling at my jersey and then he starts blowing kisses at me. I guess that was his way of acknowledging me. It was so obvious I had the entire row of people sitting behind me commenting on it and laughing. One woman, sitting right behind me, asked me to show her the sign. Turns out that woman is Jason Terry's wife.

As you can see in the picture, Westbrook is sitting to Durant's left. I get his attention and he also reads the sign. His reaction? He scratches his head while looking extremely confused. Oh well, at least Durant got it..

As the game winds down I realized I got the attention of someone sitting right behind the OKC bench. The guy looks familiar and is trying to get my attention. I can't hear him, but he mouths to me asking am I rooting for OKC. I smile and say "No Way!"

When the game clock hits 0:00, the man walks up to me. He asks if I'm from Seattle. I tell him yes. He asks if we were going to the Super Bowl and what we thought about the Hawks chances. His next comment shocks me. "I have been with this franchise for 17 years and I really miss Seattle. I wish we never left. I really hope you guys get a team, you guys really deserve one" He shakes my hand and wishes my wife and I the best.

I had to figure out who this was. Looked him up after the game. He is..

Dwight Daub enters his 17th season with the Thunder and his 14th as Director of Athletic Performance. During his first three seasons with the team, he held the title of strength and conditioning coach.

Daub is responsible for the development and implementation of strength, conditioning and nutritional programs for all Thunder players. Daub helps each player establish a personalized diet and training regimen and assists them with injury rehabilitation. He also arranges offseason training programs and monitors each player’s physical progress between seasons

I found that directly off of the OKC website, how much does the following piss you off... "Dwight Daub enters his 17th season with the Thunder"

Just before my wife and I leave our seats I see ESPN's Chris Broussard looking at his phone. I walk up to him and ask for a picture. He says sure and "I saw you guys sitting there all game, good for you. I really thought you guys were going to get the Kings." I replied, "I want our Sonics (expansion), not someone else's team."

The weekend was just getting started and we had a great experience at the Nets game. I just really wish it was our Sonics that were playing them. Someday.. someday..

The Seahawks did a very good job in helping me at least forget about this for now. Our experience at the Super Bowl deserves its own fan post. In addition to the amazing game.. I got to sit right next to Andrew Zimmerman (Bizarre Foods). 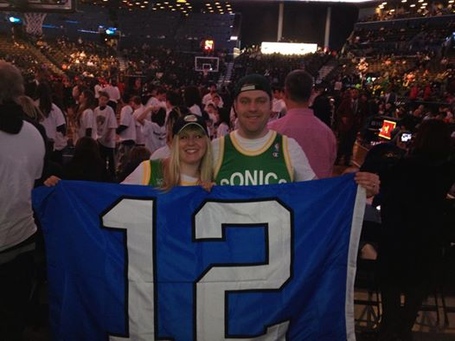