Join us in our ongoing look at the ten greatest players in Sonics history. This week, we examine Rashard Lewis.

Share All sharing options for: The Ten Greatest Players In Supersonics History - #6 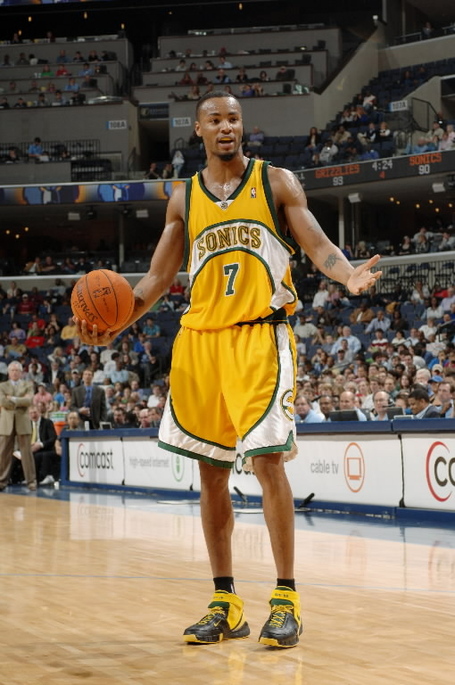 When Rashard Lewis declared for the 1998 NBA Draft straight from Alief Elsik HS in Texas, the consensus was that the 6-10 forward was a likely lottery pick. Considering high school standouts such as Kevin Garnett, Tracy McGrady, Kobe Bryant and Jermaine O’Neal had all been selected in the first round in the previous three years, this seemed a sensible prediction. Instead Lewis was not only NOT the first high schooler selected in the 1998 Draft (Say hello, Al Harrington), he slid all the way out of the first round to #32 and was the last player left standing in the green room, in tears. Selected by Seattle after mediocre big man Vladimir Stepania, Lewis joined fellow draftee Jelani McCoy on a Sonics roster in transition.

The 1998 Seattle Supersonics were a team past their prime championship years. Shawn Kemp had forced his way out of town before the previous season and had been traded in a 3-way swap netting Vin Baker in return. Baker had a terrific 1997 campaign but a disappointing season in 1998 (and several more thereafter). Many other players such as Schrempf, Hersey Hawkins and Dale Ellis were beginning to show their age. An NBA lockout that year wiped out almost half the season, and the 50 games that were played were an up and down affair. The team finished an abysmal 26th out of 29 teams in defensive rating. Lewis barely played his first year, but over the next four seasons solidified his place as an offensive weapon and credible second option behind Gary Payton.

Lewis began his career as more of a post option than he subsequently became. Despite his 6-10 height he was rather thin, and after a couple of shoulder subluxations from repeated contact in the post he developed more of a shooter’s game, using his long arms and accurate jumper to shoot over opponents. Beginning around 2004-05 Lewis had a three year streak of averaging over 20 PPG and being among the league leaders in 3 point field goals made and attempted. To date he is 8th in NBA history in both statistical categories.

When Gary Payton was traded for Ray Allen at the trade deadline of the 2002-03 season, I was particularly interested in seeing how a team with two perimeter players, albeit highly successful ones, would be able to compete against many of the more balanced teams in the Western Conference. The Allen/Lewis duo was a highly successful scoring combination in the regular season but the lack of solid complementary pieces at the power forward and center positions, along with an inexperienced roster and head coach produced poor results their first two seasons together. It all came together in the 2004-05 season where the team won 52 games, Allen’s 23.9 PPG led the way but Lewis was perhaps the most complete player on the roster, averaging 20.5 PPG, 5.5 RPG and shooting 46% from the field and 40% from 3 point range.

The team never repeated the success of 2004-05, and what was an already shaky defensive roster got even worse. Additionally, an impending franchise sale and move made Lewis' situation even more unstable. NBA economics at that time virtually demanded that a player with Lewis’ statistical achievements get a max contract. Not taking anything away from his achievements, but in my opinion Lewis was not a max contract player. He was a great complementary shooter to a team with a post presence and a good distributor, but not a true #1 option. The Sonics ended up doing a sign and trade deal to the Orlando Magic for a 2009 second round draft pick and a trade exception, setting the stage for what would eventually become the current roster of the Oklahoma City Thunder. Lewis played with the Magic for three seasons, tallying one Finals appearance. He then was eventually traded straight up for Gilbert Arenas in 2010. He is currently a member of the Miami Heat.