Led by Shawn Kemp’s 27 points and 18 rebounds, the SuperSonics used a 23-4 run spanning the end of the second and beginning of the third quarter, that give them a lead that they would never relinquish. Seattle wins Game 1, 110-97. 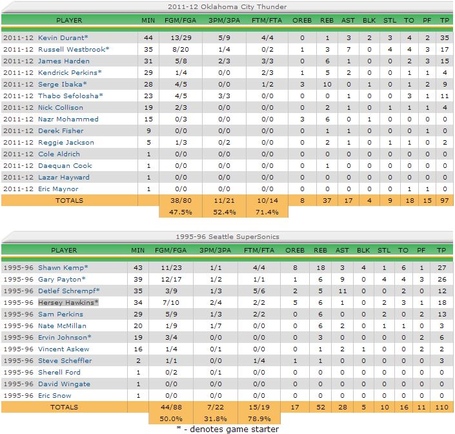 The team over at www.WhatIfSports.com ran a simulated seven game series to determine who the best team is/was. This week, we’re going to recap those simulations in a somewhat fantastical fashion. With that being said, let’s dive into Game 1.

"Not In Our House!" by Sir-Mix-A-Lot was the fight song for the Sonics during the ’92-’93 season. Today seems like a fitting day to re-introduce that anthem to the world. Led by Shawn Kemp’s 27 points and 18 rebounds, the SuperSonics used a 23-4 run that spanned the end of the second and beginning of the third quarter, that give them a lead that they would never relinquish. Seattle held fort at home for the Game 1, 110-97 win.

From the looks of it, it certainly didn't start out so convincing. Kevin Durant, looking to impose his will from the beginning, poured in 12 first quarter points on 5-10 shooting. The Thunder, showcasing the evolution of the NBA from the 1995-96 season, went 6-10 from the three point line and took a 14-4 lead in under 3 minutes.

The Sonics defense came in to play in the second half, led by aptly named "The Glove" Gary Payton (4 steals), the Sonics held the Thunder to 16 points on 7-22 shooting (31.8%). Russell Westbrook, ditched Dr. Jekyll and played to his Mr. Hyde side: 8-20 shooting, 17 points, 4 turnovers, and was completely schooled by Mr. Payton (12-17 from the field, 26 points, 9 assists, 6 rebounds). The Thunder held true to form, coughing up 18 turnovers with constant pressure from the Sonics defense.

Things got even worse for the young Thunder in the third quarter. When Ervin Johnson is raining jumpers from all over the floor, then you have to know this is not your day.

After a slow start, Detlef Schrempf scored 8 of his 11 points in the third quarter, including what I’m sure would be a SportsCenter worthy dunk following a nice feed from Payton. Though he wasn't the scorer he had been in the ’96 season (17.1 ppg), Schrempf dished out 11 assists and played masterful defense on Durant, helping hold him to 2 points in the third. Westbrook’s, all too familiar, ball-dominating act, didn't help. Westbrook out-shot Durant 2-to-1, including three hurried shots (two of which were heavily contested) at the beginning of the quarter. The Sonics two point halftime lead ballooned to 17 points by the end of the third quarter.

A valiant effort by Durant in the fourth quarter (16 points, with 3 three pointers), would make you think that this was a closer game than what it was. Serge Ibaka was rendered invisible on the boards by Kemp (8 offensive rebounds) and largely ineffective on defense (0 blocks). James Harden was largely passive in this one, being outplayed by his counterpart Hersey Hawkins (18 points, 6 rebounds), while both benches did nothing memorable (Nate McMillan and his 1-9 shooting notwithstanding).

The story in this one was the domination on the boards by the SuperSonics (52 to 37, including 17 offensive rebounds). The Thunder’s early three point barrage ran dry quite early, and they were not up to snuff in the paint. This was a game of men against boys, and the old guard proved that their classic game provided classic results. Let’s see if Game 2 can provide a different result.

Player of the Game: Shawn Kemp, did you see how he dominated Ibaka?

X-Factor: Hersey Hawkins, everyone knows the stars are going to contribute, it’s the role players that play a key difference.

You Have To Do Better: James Harden, he is the true third star, the Sonics can't boast about. He has to play well in Game 2.