Share All sharing options for: 1996 Seattle SuperSonics lose a stunner to the 2012 Oklahoma City Thunder, 95-92 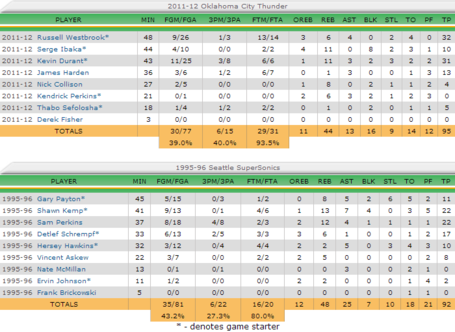 Attempting to go for the quick two with 0:13 seconds left in the game, Hersey Hawkins attempted a jumper from the right block that was promptly swatted by Thabo Sefolosha. Grabbing the loose ball, Hawkins retreated out to the left corner for a game tying three, Kendrick Perkins stepping out to meet him.

Replays seemed to indicate that Perkin’s right arm made contact with Hersey's right arm as he blocked the ball. No foul was called, and the Thunder escaped with the 95-92, Game 2 win.

The shooting struggles continued, but the Thunder found a way to bring the series home all tied up at 1-1.

The Thunder did a much better job on the defensive end, lowering the rebound disparity to four, recording 16(!) blocks, and holding the Sonics to 27% shooting from three.

The Thunder held a single-digit lead through most of the game, extending out to nine early in the fourth quarter, but allowing the Sonics to stay within four most of the way.

Game 2 started out much like Game 1, the Sonics falling behind early in the first quarter, but shortening the lead to five by the end of the first. Westbrook and Kevin Durant combined for 21 of the Thunder’s 25 first quarter points. They attacked the rim, made their jumpers, and got to the free throw line.

On the other end, Shawn Kemp continued his great play on both ends in this series, while Gary Payton had one of his worst games in a long time. Things started badly for "The Glove." He missed his first shot (a free throw), missed easy layups, was blocked by Durant and Serge Ibaka, and generally could not get into a grove. It was unfortunate, because the rest of the SuperSonics came to play. Every starter scored in the first quarter, as well as Sam Perkins off the bench.

Speaking of Sam Perkins, "Big Smooth" carried the Sonics offense in the second quarter. He recorded 10 of his 22 points, and 4 of his 12 rebounds in the quarter, and generally looking like the predecessor to Dirk Nowitzki. The Sonics still couldn’t take the lead and headed into half time with a 47-46 lead.

The stalled offense caught up with the Sonics in the third quarter. Turnovers and ill-advised jumpers buried the Sonics offense. The Sonics went a span of 5:03 where the only shot made was a Payton lay-in at the 11:03 mark. The Thunder’s defense forced four turnovers during that span, got to the line 10 times, and ended the quarter with an eight-point lead.

The Sonics saved their best for the last quarter, but it wasn’t enough. They finally took the lead on a Vincent Askew jumper with 5:03 left in the game. Defense tightened and after a scoreless 1:30, the Sonics regained the lead on a teardrop Shawn Kemp fadeaway over Ibaka. Following back to back drives by Westbrook, Detlef Schrempf, and the Sonics were whistled for two consecutive fouls. Ibaka’s free throws, and a jumper each by Schrempf and Durant led us to our controversial ending.

Surprisingly James Harden’s impact was still minimal, while the Sonics bench (minus the invisible Nate McMillan) was terrific due to Same Perkins. The Thunder blocked 5 shots in the fourth, and kept Shawn Kemp from seeing the ball for the last three minutes of the game.

At the end of it all OKC forced Payton into uncharacteristic turnovers, limited the impact of Shawn Kemp, while using their length and athleticism reminiscent to hold the Sonics shooting in check. Seattle’s pressure defense, held the Thunder to 39% from the field, but the Thunder’s aggressiveness was too tall of a mountain to climb today.

Even if it was a bit controversial.

Player of the Game: Russell Westbrook, he ate breakfast, lunch, dinner, and slept at the foul line.

X-Factor: Serge Ibaka, when you are two blocks away from a triple-double, that makes you a difference maker.

You Have To Do Better: Nate McMillan, Mr. Sonic has been invisible in the first two games of this series. He doesn't have to be perfect, but he has to do better than a combined 2-18 from the field.