This close. That's how close the Oklahoma City Thunder have been from a 3-1 series lead. Instead, the Thunder head back to Seattle down 3-1, with questions once again surrounding the play of their explosive point guard.

If you buy something from an SB Nation link, Vox Media may earn a commission. See our ethics statement. 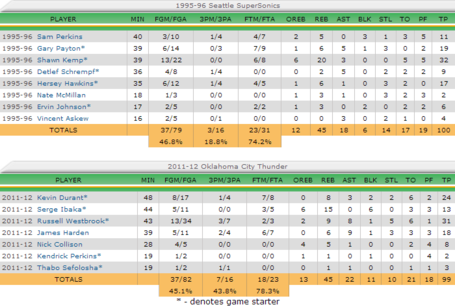 Thunder on the Brink

The Thunder could not counter the Sonics down the stretch and face elimination, down 3-1.

Thunder on the Brink

At times that criticism is warranted. For every 30 point, 10 assist game explosion you get the equally maddening 9-30 shooting and/or 7 turnovers. You can just hear the perceptions in those stats, "Would OKC be better off if they traded him? Why is he shooting more than Kevin Durant?" and "He’s the engine that churns the Thunder locomotive. He’s one of the 3 or 4 most explosive players in the NBA."

Neither of those comments are incorrect, per say. Excluding last season due to Westbrook’s injuries, 2011-12 and 2012-13 saw Westbrook average almost one more shot per game than Durant; even though Durant was much more efficient (.503 to .448). Westbrook will place his stamp on each game, you just wonder which version you will get.

Unfortunately for OKC, Game 4 of the ’96 Sonics vs. ’12 Thunder series was the exactly the type of Westbrook game that shapes those perspectives. Russell finished with a near triple-double (31 points, 9 rebounds, 8 assists, 5 steals), but committed 6 turnovers and shot 13-34 from the field. That inefficiency and questionable decision-making was no more evident than in the soul-crushing fourth quarter.

With 0:20 left in the game, holding a one point lead, the Thunder point guard Westbrook missed a rushed 18 footer, allowed Gary Payton to get into the lane (after a failed gamble for a steal) to find Shawn Kemp for an easy dunk, and then took the last shot (Durant never seeing the ball) on another pull-up jumper.

The Sonics came away with the 100-99 win, giving them a 3-1 series lead heading back to Seattle.

The Thunder recovered well from Game 3

One would have thought that the Thunder would still be reeling from the devastating OT loss in Game 3, but it was exactly the opposite. They came out on fire. Westbrook scored 15 points and dished 3 assists, the Thunder looked renewed, moving the ball, consistently bending the Sonics pressure defense at their whim.

The Sonics looked complacent and stale on defense, while giving way to the Thunder’s athleticism on defense. Out of the eight made shots in the first quarter, only three of those baskets were converted from good offensive. They seemed out of sync, satisfied with the last game’s win. The Thunder ended the quarter on a ridiculous 20-3 run and a 14-point lead.

Funny thing is whatever happened in the teams' huddles between quarters turned the second quarter into the polar opposite. Characterized by the layup line the Sonics formed behind the lackadaisical Thunder defense, that 14-point deficit shrinked to a manageable 3-point one. In the middle of the quarter, Seattle managed to convert a driving floater from 5 feet, two dunks, and a finger roll from three separate players.

Kevin Durant (24 points, 8 rebounds, 6 turnovers) continued to struggle with the ball-denying defense of the Sonics. Sam Perkins (11 points, 3-10 from the field), Ervin Johnson, Hersey Hawkins (17 points, 6 rebounds), and Vincent Askew saw time on Durant in the second quarter alone. Though Westbrook’s self-belief that he can carry the team always helps limiting Durant’s attempts. You've got to give the Sonics credit, their game plan from Game 3 has continued to work.

The Sonics much maligned (at least in this series) bench managed to keep the lead from getting away in the third quarter with solid defense and timely offense (easy conversions off of turnovers), but the starters inability to convert anything offensively kept them from taking the lead.

In the third quarter the Thunder’s ball-movement resurfaced, giving them control of the game as in Game 3. They got off the shots they wanted in the areas they prefer them. A few rebounds and tipped passes were all that separated them from a double-digit lead.

Gary Payton (19 points, 6 rebounds, 5 assists) finally showed signs of life in the fourth quarter, scoring 8 of Seattle’s first 10 points. Charging to the rim instead of settling for jumpers, unlike the previous three quarters. Most importantly, his defense finally appeared to have an effect on Westbrook. Westbrook went 2-10 in the final quarter, Payton harassing him away from the rim and intelligently funneling him into help defense when Russell was able to get into the paint.

Yet, the Sonics still didn't have the game in hand until the final play. A 9-2 run defined by great offense from Seattle gave them the win. Clearly bothered by OKC’s defense, the mainly invisible Detlef Schrempf (9 points, 5 assists) and Kemp converted contested shots to bring the lead down to two, 98-96. Good ball movement gave Ervin Johnson the easy look at the rim for the tie at 98.

Just like the OT period in Game 3, Westbrook took the majority of the shots in crunch time. He attempted 3 of the 5 shots in those last 2:00 minutes, while Durant never attempted one. With the game on the line, why would your star not see the ball, more than once (the one time he did have possession, he lost the ball to Hawkins)? Surrounding Kemp's winning dunk, Westbrook missed a fade away from 18 feet and a pull up from the left side, giving the Sonics the win and his critics more ammunition.

Is it too little too late for the Thunder?

Shawn Kemp (32 points, 20 rebounds) continues to be a major problem for the Thunder. He shot five jumpers the entire game. Two he missed, one of which he was fouled, one he converted, and one that was blocked by Serge Ibaka (13 points, 15 rebounds, 6 blocks). I guess you don’t have to shoot many jumpers when you can make five dunks, including the game winner with 0:11 seconds left in the game.

The Sonics bench played their best game, even if it was mainly defense. They did enough to offset James Harden (18 points, 9 assists, 6 rebounds, 5 steals) and the sneaky good Nick Collison (8 points, 4 offensive rebounds, limiting Sam Perkins impact on offense) when honestly the Sonics were outplayed for most of the game, again.

One has to wonder, is this the veteran Sonics experience giving them the wins or is the Thunder’s inability to closeout games rearing its head through their youth? The Thunder better figure it out or this series will be over sooner than later.

Player of the Game: Shawn Kemp. Another game winner, he's getting to the rim at will. Unstoppable.

X-Factor: Sonics Defense. George Karl's decision to throw multiple bodies at Durant has worked well enough in the last two games. It was the catalyst in Game 4.

You Have To Do Better: Russell Westbrook. Enough with the hero ball in critical moments of the game. If Scott Brooks is not going to reign in his shot attempts, the Thunder are set to live and die by them. That's not an intelligent prospect given you have Kevin Durant on your team.