We're a little late to the party, but Sonics Rising jumps in on SB Nation's NBA trade season by playing the role of matchmaker.

December 15th has come and gone and with that, the trade season is in full swing for the NBA and the community of NBA blogs here on SB Nation. For the past couple of days, the blogs around SB Nation have been deciding whether their respective teams are buyers or sellers, what they need, what they can give up, and threw out some hypothetical trades as well.

Sonics Rising is doing their part by playing the role of matchmaker, pairing up teams for trades that make sense, and some that don't.

Get the latest trade rumors, news and analysis from around the NBA in one convenient place.

Basically, I'm Will Smith in the movie Hitch. No Knicks, I can't help you.

The Heat land a guard at a low cost

Brandon Rush to Miami; Joel Anthony and a second-round pick to Utah.

Matt Pineda of Hot Hot Hoops suggested that the Heat acquire Brandon Rush, and I love this trade for both sides. The Heat get Brandon Rush, a guard that isn't great but can be acquired for the low cost of Joel Anthony and a second-round pick. Rush is a slasher and could be very effective for the Heat on offense. He's also a guard, an area where the Heat really need depth. For the Jazz, the only depth they have at the center position behind Enes Kanter is the very raw and currently ineffective Rudy Gobert and the shell of what Andris Biedrins used to be (which wasn't much). Anthony would provide depth there and a veteran presence to a young Jazz team. Anthony is no all-star by any means either, so he wouldn't derail the Jazz's efforts of landing Jabari Parker. The Heat throw in a second-round pick here, too, since Anthony's contract is for two years while Rush's was expiring.

Arron Afflalo goes back to Denver

Nate Timmons of the Denver Stiffs suggested that the Nuggets target the former Nugget Afflalo and Tyler Lashbrook of the Orlando Pinstriped Post suggested a trade to Denver involving Glen Davis. I think we can make this work...

I'd be hard-pressed to say that Denver would take Glen Davis' contract without getting something more. I'd also be hard-pressed to say that Orlando just gives Arron Afflalo away. Could Orlando convince the Nuggets to take Davis' contract in exchange for the services of Afflalo while also coughing up a pair of second-rounders? I think so. The Nuggets gain a scorer in Afflalo and get some quality minutes from the 2G position, minutes that had been going to Andre Miller, Evan Fournier, Nate Robinson, and Randy Foye; certainly an upgrade. The Nuggets also get an upgrade over Darrell Arthur as a reserve post player in Big Baby Davis. This would allow Davis to return to his old role of coming off the bench and beating up opposing bigs in the post.

The Magic would rid themselves of Davis' contract, get two second-round picks for the upcoming draft (Denver's second pick in that round comes from Portland), and they get Professor Miller, another young big in Arthur, and an expiring contract in Jordan Hamilton. Orlando increases their collection of assets and loses a bad contract, and Denver gains the scorer they need.

How Seattle Can Steal the 2014 NBA All-Star Game

It's time for Seattle to take the national stage again and here is a simple plan that will allow us to do it.

Who Was The Sonics Greatest Rival?

It can be hotly debated who the Sonics' true rival once was. Was it the team in Portland? Maybe the team in Houston or Phoenix? Was it the Jazz of Utah?

How Seattle Can Steal the 2014 NBA All-Star Game Who Was The Sonics Greatest Rival?

The Wizards improve their bench: v.1.0

Steve Perrin of Clips Nation suggested that the Clippers attempt to acquire Trevor Booker from the Wizards. Meanwhile, the Wizards are having a tough time getting good minutes from their backup guards. Eric Maynor has been less than advertised thus far and the Wizards desperately need help on the bench. The Clippers have plenty of guards and could really use a big off the bench like Booker, who has seen some starts lately for the injured Nene. Booker is also expiring, which also plays into the Clippers' favor for freeing up some money next season. The Clippers would have to send cash to help make this trade work.

The Wizards improve their bench: v.2.0

Blog a Bull suggested this one, and it's another way to improve the Wizards' bench while helping Chicago flip Dunleavy's contract into two expiring contracts. Bullets Forever suggested a different trade to Chicago in which the Wizards would acquire Luol Deng in exchange for Otto Porter and Trevor Ariza. I think it's a little early to give up on Porter and the Wizards are probably better off keeping Trevor ATHREEza around for this season. Instead, The Wizards should consider this trade, one that would improve their scoring off the bench.

The Clippers get the big they need

The Clippers really need a center that can finish games. By "finish games" I mean play halfway decent defense and hit free throws. Spencer Hawes does both of those things, averaging nearly as many blocks per game as DeAndre Jordan and shooting 75% from the charity stripe. Jordan? 40% from the line. Trading Hawes for the likes of Dudley and Green gets Philly a little something for Hawes' expiring and helps them on the path of tanking. Dudley has one of the lowest PER's on the Clippers and I'm sure the Clippers can find someone to fill his spot... Oh wait, they just signed Stephen Jackson.

Mavericks improve in the front court

Tim Cato at Mavs Moneyball cited needs at the center position and scoring off the bench for the Mavericks while Ryan Mourton at Fear the Sword came up with about 50 different ways to trade Anderson Varejao. In this deal the Mavericks upgrade the center position with Varejao and get a swingman off the bench in CJ Miles. The Cavaliers swap Varejao's contract for Shawn Marion's expiring and get to replace Varejao's roster spot with Samuel Dalembert, a serviceable big. Marion would be an upgrade at the SF spot for the Cavs and help them with that thing called "playing defense," too.

Dave Deckard at Blazer's Edge expressed the need for the Trail Blazers to improve their bench and get some insurance behind Robin Lopez and Damian Lillard. Many think that the Blazers should try to trade for Omer Asik, but I'm in the thinking that the Blazers shouldn't mess with the chemistry that their starting five has built. Instead, let's improve that bench by dealing with Masai over in Toronto. The Raptors want to deal Kyle Lowry but won't give him away for nothing. The Blazers will have to cough up one of their young prospects and probably a draft pick, too. In this deal, the Blazers give up Crabbe, Williams, Freeland, and a pick for Lowry and Psycho-T. If Lillard or Lopez were to go down, I feel better about Lowry and Hansbrough getting those minutes than Mo Williams and Joel Freeland.

Frank Madden at Brew Hoop threw out two different trade scenarios for the Bucks, one sending Ersan to OKC and one sending him to San Antonio. I have combined the trades based on the different needs of the teams involved. San Antonio really needs a solid fourth big so the Bucks can send Ersan there in exchange for a young guard in Cory Joseph and Boris Diaw's expiring contract. OKC wants to get rid of Kendrick Perkins and add a wing scorer. For OKC to get rid of Perkins, they'll have to send one of their prospects along with him, so goodbye to Jeremy Lamb. For Lamb, Perkins, and the first-round pick the Bucks send O.J. Mayo (the wing scorer and legit third guard the Thunder needs) and Ekpe Udoh as another body to put in the paint. To Milwaukee, you weren't supposed to be this bad, but sometimes the tank chooses you; embrace it, gather assets, and ride with G-Po.

The Thunder would be in need of the one thing that Kendrick Perkins did bring to the table, which was low post-defense. There is this guy Jason Collins who is a free agent and is pretty good at that. I'd bet he'd take the veterans minimum, too.

The unlikely three team deal between the Wizards, Lakers, and Bulls 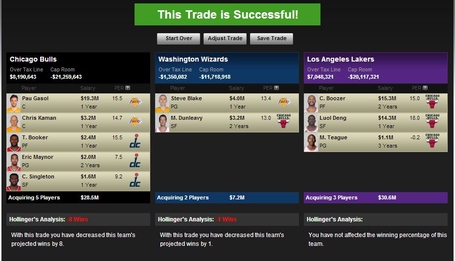 In this deal Chicago realizes they aren't winning the title this season and decides to blow it up while the Lakers look to improve their team by getting rid of a disgruntled Pau and acquiring players from the Bulls while still keeping their cap space for the 2015 off-season. Boozer and Deng would make the Lakers much better, and paired with Kobe Bryant, would probably get the Lakers into the playoffs. Deng expires after this year and if he's happy, the Lakers will have the opportunity to re-sign him while Boozer comes off the books in 2015. The Bulls get back Pau Gasol, who could improve under Thibs' coaching, and if not, he expires after this season. The Bulls also acquire three other expiring contracts. The Wizards help facilitate this trade by sending dead weight in expiring deals to the Bulls and get some bench help by taking on Mike Dunleavy and Steve Blake, a guard that can give some relief to John Wall and Bradley Beal and can play next to either of them.

Why is it unlikely? I'm not sure the Bulls know what they want to do yet and with Deng expiring and the ability to amnesty Boozer, they really don't have to make a deal. I'm also not sure that the Wizards could acquire both players so easily without giving up a bit more. I imagine that the Lakers would love this trade though, even if it means sending Steve Blake back to the DMV.

The Kings are in need of an upgrade at the PF spot as Greg Wissinger of Sactown Royalty pointed out, but I think more than anything, Kings fans would like to see Jason Thompson and Marcus Thornton in different uniforms, even if it means taking a bad contract back in return. The Grizzlies are in need of shooting and a guy who can play the 2 and the 3. Enter Thornton. The Kings and Grizzlies swap bad contracts with Tayshaun Prince and Thornton, but like John Salmons before him, Kings fans just want Thornton gone. The Grizzlies acquire the shooter they need in Thornton and a young asset at the PF spot in Jason Thompson. Trading Thompson also frees up minutes at the SG and PF positions for Ben McLemore and Derrick Williams to get more playing time at their positions.

And no, I don't like any of the trades involving Omer Asik. If I'm Hitch, then Omer Asik is definitely Vance Munson. Or maybe that's James Dolan...