The third greatest player in Sonics history is a Seattle icon, and one of the most captivating players of his decade.

Share All sharing options for: The Ten Greatest Players In Supersonics History - #3 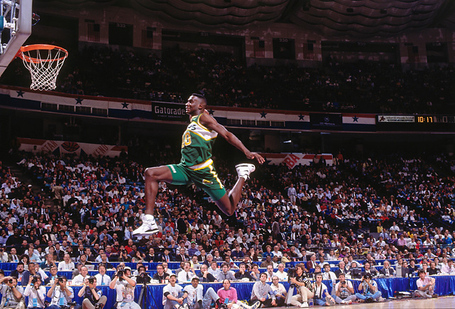 Perhaps the most iconic Sonic in franchise history along with Gary Payton, and the undisputed cornerstone of the 90s teams, Shawn Kemp’s career went from flashes of greatness to full-blown franchise and civic icon, to fallen icon bordering on punchline and back again.

The Sonics held two consecutive picks in the 1989 NBA Draft, #16 and 17. The team selected guard Dana Barros with the first, and an unknown skinny kid out of obscure Trinity Valley Community College in Texas with the other. My recollection of the time is that it was an unpopular pick. I remember hearing a mix of boos and "who the f*** is this guy?"

It didn’t take long for Kemp to make his mark, though. Though the 1990-91 team was relatively stacked with talent, featuring Xavier McDaniel, Ricky Pierce, Eddie Johnson, Derrick McKey and the perpetually frustrating conundrum that was Benoit Benjamin (along with Sonic All-Mustache Team member Dave Corzine), it was the addition of firebrand point guard Gary Payton, and the following year new coach George Karl that gave the team its new identity. At age 21 Kemp averaged 15 PPG and 8.4 RPG along with shooting 50% from the field. He would continue to post increases in scoring and rebounding for the first seven seasons of his career, a truly remarkable feat that has rarely if ever been duplicated. Between 1993 and 1997 Kemp put up some truly staggering seasons, averaging 10.8 total win shares during that time. All the more remarkable in that a great deal of his post-up game would actually seem rather limited by today’s standards. He’d set up on the right block and use a hook move with his elbow to open space then either knock the short jumper down or slam it home. He and Payton were a truly deadly combination in transition. Payton had a great knack for throwing the lob pass and Kemp was especially good at getting into space with a step on a defender. On defense Kemp was an outstanding offensive rebounder (to date, the franchise career leader) but often suffered from a propensity to commit truly stupid reach-in fouls, a problem that plagued him during his entire career in Seattle. During the first eight seasons of Kemp’s career he was top 3 in personal fouls – a dubious achievement, and perhaps his only true Achilles heel in a brilliant run.

Kemp’s dunks were and are the stuff of legend. I’ve seen many of the great dunkers in my time. Dr. J, Jordan, Vince Carter, Blake Griffin, Kobe, Spud, I’ve seen ‘em all. Griffin comes close, but Kemp may have been a better dunker than any of them when it came to sheer, raw power. Defenders learned early on not to try to take a charge on Kemp because they might end up with footprints on the front of their jersey or even unconscious. Even today I can play a Kevin Calabro call of Kemp dunking and get chills up the back of my neck.

Off the court it is difficult to explain to people who did not live in Seattle, or were not old enough to remember what his cultural impact as an icon of the town was back then. Seattle sports was basically defined by two guys: Ken Griffey, Jr. and Shawn Kemp. Yet where Junior’s beaming smile made him a natural Wheaties box All-American role model, Kemp was more of a scowling mystery, a hoop-smashing, in-your-face-dunking Black Dynamite badass, replete with pillbox hairdo. Everybody loved Junior, but wanted to be Shawn Kemp. He captivated the city in a way that subsequent Seattle sports icons including even Payton were never really able to, in my opinion.

During his tenure the Sonics were an immensely successful attraction. The Mariners were their usual mediocre bumbling loser selves and came within a hairsbreadth of leaving town, and the Seahawks were the definition of a mediocre football team who also had their problems with ownership. The Sonics made the playoffs every year of Kemp’s career. A pair of humiliating first round exits in 1994 and 95 ensued followed by a trip to the NBA Finals where the team lost to one of the great NBA teams of all time in the Jordan-led Chicago Bulls, 4-2.

However during the Finals itself, cracks began to show in the Reign Man’s once-impenetrable façade. New York Post writer (and it must be said, obnoxious loudmouth and ex-Toys R Us patron) Peter Vecsey reported that Kemp had been seen out drinking in Chicago extremely late the night before the team was due to play. The story contained strong innuendoes that Kemp had problems with alcohol and perhaps more. Though the rumors did nothing to impede Kemp having a truly incredible Finals performance, where he was arguably the best player on either team, cracks had begun to form in his relationship with the team that had drafted him.

On the heels of the team’s Finals appearance, before the 96-97 season the Sonics signed center Jim McIlvaine to a contract that paid him far more than what Kemp was making. What is not often remembered about this signing is that the CBA at the time forbade teams from re-negotiating contracts. Kemp’s agent at the time, Tony Dutt, had pressed the team to give Kemp an extension in 1994 that paid him far more than he had been making at the time. Unfortunately for Kemp, the timing of his request for an extension came a year or two before the market for NBA salaries exploded, and a mere two years later mediocre backups such as McIlvaine were making far more money than superstars such as Kemp were making a few years before. In short, there was nothing the team could do about it and combined with a growing distrust of members of the team’s coaching staff and management, Kemp finally demanded a trade.

The means by which Kemp’s original exodus from Seattle came about were also similar to the story of Ken Griffey, Jr. Both were beloved franchise icons who forced their way out of town rather abruptly and without thought. In Kemp’s case he was traded in a complex 3-way deal to the Cleveland Cavaliers that netted the Sonics Vin Baker and Kemp the contract he had always wanted. It’s easy to look back at this as a terrible trade with hindsight, but at the time it was fantastic value to net a player of Baker’s statistical caliber given the situation with Kemp (teams KNEW the Sonics had to trade him, thus limiting the return of what the team could command).

I attended Kemp’s first game back in town as a member of the Cavs and his reception was brutal. The entire crowd booed its collective ass off at Kemp every time he touched the ball. It was similar to how Mariners crowds treated A-Rod (and still do) when he returns. It was a measure of just how much he was beloved by the city that the hurt from the perceived slight ran deep, and indeed not soon after the trade Kemp’s personal demons came to the fore and for all intents and purposes destroyed his career. He had three successful seasons in Cleveland before being traded as a cap casualty to the Portland Trailblazers where he served for three forgettable seasons as a bench player. He was quite overweight by that time and just a shadow of the high-flying hoop fu artist he had been earlier in the decade. He played one final season in Orlando before retiring in 2003 and suffered more struggles after his playing career with drugs and money problems.

Kemp still holds team records in many statistical categories and remains one of the most beloved and iconic players in franchise history. Happily, he has reconnected with the Seattle area in recent years and today runs a restaurant and bar in Lower Queen Anne, not far from where he once ruled the court and the town. Neither of us are the people we once were in the early to mid 90s, but I still feel connected to him in a way you can only ever feel a connection to an athlete you worshiped as a younger person. To me, Shawn will always be THE ultimate Sonic regardless of how it ended. Thanks for the memories, Shawn. I look forward to seeing your #40 hanging in the rafters along with #20 soon. Kemp had innumerable sick dunks, but here's a good compilation: