With the city of Seattle on fire from the Seahawks winning the Super Bowl, now is the time for the NBA to capitalize on momentum and grant this great city an expansion team.

Today in Seattle there was a victory parade for the Super Bowl champion Seahawks. Over 700,000 people showed up to the parade, and some estimates had that number pushing closer to a million. People are still trying to get out of downtown Seattle hours later. You cannot discount the passion and the love that Seattle has for their sports teams.

That is why I'm writing this directly to you, Mr. Silver. You understand the importance of getting an NBA team back here to Seattle. We've heard the talks about you wanting to get a team back in Seattle as one of your first big orders of business.

Please Mr. Silver, do not let this just be a national media perpetuated rumor. Let it be real, let there be substance to this. Let us have our Sonics back! Now is the time, this city is riding a massive high right now and if you announce an expansion team at the All-Star Weekend we'd have a statue up of you before the end of the weekend (no joke). We'd even place the statue in front of our brand new, state of the art arena and probably dedicate a suite to you inside. I'll even petition the city of Seattle to name a street after you.

Now is the time, Mr. Silver. We haven't had our team for six seasons now. You should have seen all the green and gold the people were wearing in the streets of Seattle today, representing our former team, our Seattle Supersonics. As I write this #BringBackOurSonics is trending not only in Seattle, but also Vancouver, British Columbia and Phoenix, Arizona.

I'm sure you heard the 12th Man in the streets of New York and New Jersey over this past weekend. They can only cheer like that for their team in Seattle up to 12 times a year. Why not get us that expansion team so we can do it 41 times a year, plus the playoffs? There might not be playoffs the first season or second, but I know there will playoffs in the very near future after you grant us a new franchise.

Tonight many people who have not watched a single second of the NBA since the Sonics left have sent me some form of communication to let me know that they were going to watch or are watching the Heat-Clippers game tonight. These are people who give me death glares if I even mentioned I still watched the NBA or walk out of my house if I turned it on in their presence. The tide has changed in Seattle, Mr. Silver. The dark cloud of despair and depression has been lifted. Our Environmental Impact Study will have finished it's preliminary stages next month and we'll be shovel ready in the late summer or early fall.

Let's do this together. You have every single Sonics fan in the world standing behind you, ready to give you a parade the moment you grant expansion. You can ride on our shoulders and know that you'll never have to pay for a drink or a meal in Seattle again.

Kevin Nesgoda - On behalf of Sonics fans all around the world
Managing Editor
SonicsRising.com 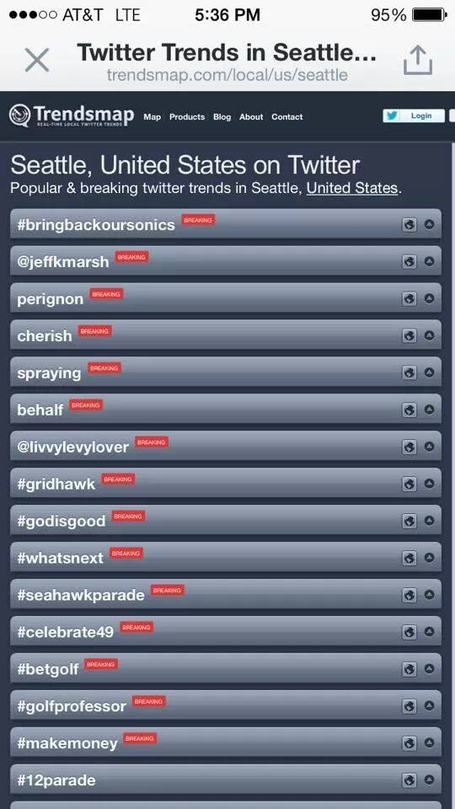