After a heartbreaking loss, the Reign Man was intent on taking matters into his own hands and leading by example. 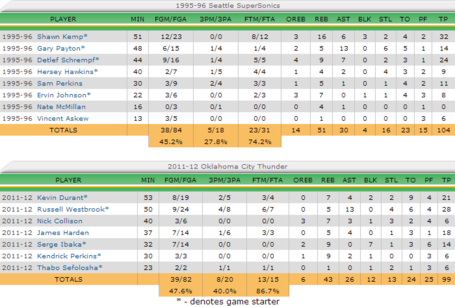 If you can remember back to the summer of 1996, this very Seattle SuperSonics were in the franchise's third NBA Finals. As the history books would have it, they were down 3-0 going into Game 4, against the greatest NBA team of all time, the 72-10 Chicago Bulls.

Seattle had been blown out in Game 3, 107-86, on their home floor. Shawn Kemp was the best player on the floor in Games 1 and 2, but in Game 3 he struggled to the tune of 14 points and 4 rebounds. Afterwards Kemp was livid. Being interviewed by the Los Angeles Times, he voiced his frustration:

The Thunder surrendered home court advantage back to the Sonics when they couldn't generate enough offense in OT and fell to Seattle in game 3.

"It's like you work your butt off in the 100-yard dash and go 90 yards and just give up," Kemp said. "You're supposed to try your heart out. If you don't, you feel like you just gave it to them. That's how I feel right now.

Kemp’s anger fueled the Sonics to a Game 4 win in those Finals. After the disappointing Game 2 against the ’12 Thunder, one could say Kemp was experiencing a bit of Déjà vu.

Down 2 with 0:12 seconds left in the game, the Sonics staring another heartbreaking loss in the eye, Kemp would not be denied. He scored the bucket that sent the game into overtime, where he scored 5 more points and assisted on another, leading the Sonics to a 104-99 win.

Kemp from the beginning imposed his will on the game, fighting through superb defense from the Thunder who blocked his shot 5(!) times, to record 10 points and 4 rebounds in the first quarter.

The Thunder, brimming with confidence from their Game 2 victory, kept pace with Kevin Durant (8 points) and Russell Westbrook (9 points) continuing their aggressive play. The seven lead changes in the first quarter set the tone early.

The role players came to play in the second quarter as Detlef Schrempf, Hersey Hawkins, Sam Perkins, Serge Ibaka, and James Harden traded baskets, with six more lead changes occurring. Seattle sustained a lead through the last 4 minutes behind a hail of three-pointers, but still only held a one point lead at halftime.

The third quarter featured more of the same. The Sonics did manage to rein in Russell Westbrook, behind Gary Payton’s fantastic defense. Westbrook was held scoreless (0-5 from the field, 2 turnovers) from 1:32 of the second to 3:35 left in the fourth. The helped the Sonics gain their biggest lead of the game going into the fourth, 74-68.

The Thunder’s aggressiveness was turned against them in the fourth. Shots from the outside began to dry up for Seattle (the Sonics went a combined 2-8 from outside), so the Sonics turned to the free throw line for points (11-15 from the line).

Even with a single digit lead throughout the fourth, Seattle seemingly had this game in the bag with 3:30 to play. A bobbled pass leads to a turnover by Detlef, Ervin Johnson attempts an erroneous turnaround jumper, Durant converts a layup and a three, in between a Nick Collison mid-range jumper, and just like that it’s a tie game.

The Sonics were crumbling. Gary Payton missed two free throws. Johnson gets the ball stolen by Durant. The Thunder get an offensive rebound, and Westbrook puts in off the glass with 0:12 seconds left. Chesapeake Energy Arena is rocking, the Thunder can smell victory.

The Sonics, all seemed to be shell-shocked. All except for one, he had come prepared for this. Mr. Shawn Kemp.

Excellent defense on Durant (0-1 shooting, offensive foul) and Westbrook (0-5 shooting) and the aforementioned Kemp burst in the extra period sealed the deal for the Sonics. The Thunder went on an unprecedented 11-3 run in the fourth until the final point by Kemp. The Sonics very well should have won this one as much as they should have lost it.

Russell Westbrook (28 points, 13 assists, 4 steals, 6 turnovers) played well in stretches, but his over-aggressiveness really hurt the Thunder. He shot 9-24 from the field, none more costly than his shot selection in overtime. James Harden (18 points) and Serge Ibaka (14 points, 9 rebounds, 7 blocks) continued their improved play, while Nate McMillan (16 minutes, 0-3 from the field) was again invisible.

The Sonics pulled a stunner of themselves in overtime and won one of the Thunder’s floor, proving one thing: we’ve got a real series on our hands.

Player of the Game: Shawn Kemp. He was a man amongst boys

X-Factor: Detlef Schrempf. He outplayed Kevin Durant and helped keep him in check on defense.

You Have To Do Better: Thunder Offense. The Thunder played a good game, but questionable shot selection from Westbrook and turnovers doomed them at critical moments.